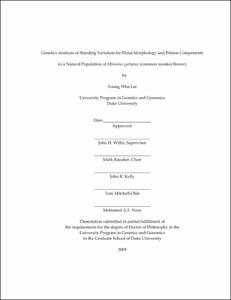 An unresolved problem in evolutionary biology is the nature of forces that maintain standing variation for quantitative traits. In this study we take advantage of newly developed genomic resources to understand how variation is maintained for flower size and fitness components in a natural population of annual Mimulus guttatus in the Oregon Cascades. Extensive inbreeding depression has been documented in this population for fertility and viability (Willis 1999 a,b), while previous biometric experiments have demonstrated that some of the floral variation in this site is due to common alleles perhaps maintained by balancing selection (Kelly and Willis 2001, Kelly 2003). Detailed comparison of the genetic architecture of these two categories of traits can clarify the relative contributions of mutation versus selection in maintaining trait variation within populations as well as the relevance of standing variation for trait diversification.

We present here the results from a large scale effort to dissect variation for flower size and a suite of genetically correlated traits. In 3 independent F2 mapping populations we mapped QTLs for floral morphology (flower width and length, pistil length, and stamen length), flowering time, and leaf size. We also mapped segregation distortion loci and QTLs for fertility components (pollen viability and seed set) that exhibit inbreeding depression. We compare the genetic architecture of these two sets of traits and find clear differences. Morphological traits and flowering time are polygenic and QTLs are generally additive. In contrast, deleterious QTLs associated with segregation distortion or fertility are partially recessive and include major QTLs. There is also little co-localization between morphological/flowering time and fertility QTLs. The analysis suggests that the genetic basis of segregating variation in morphology is fundamentally different from traits exhibiting inbreeding depression. Further, there is considerable variation in the extant of pleiotropy exhibited by QTLs for morphological traits as well as flowering time and we report that epistasis contributes to the standing variation for these traits. The analysis suggests that the standing variation is relevant for trait diversification and that the variation in floral allometry, plant form, and life history observed in the guttatus species complex could have readily evolved from the standing variation.