The association of HIV counseling and testing with HIV risk behaviors in a random population-based survey in Kisumu, Kenya. 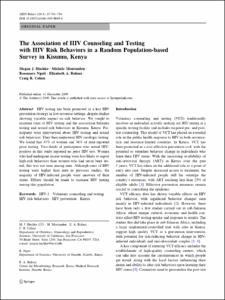 Hollier Family Associate Professor of Global Health
Megan Huchko, MD, MPH, holds a dual appointment as an Associate Professor in the Department of Obstetrics & Gynecology and the Duke Global Health Institute.  Dr. Huchko was an undergraduate at Duke before moving to New York City to complete medical school at the Albert Einstein College of Medicine, and residency training at Columbia Presbyterian Medical Center.  She completed her fellowship in Repr