Black Femininity through the White Speculum: The Implications of Medicosocialism and the Disproportionate Regulation of Black Women’s Reproductive Autonomy 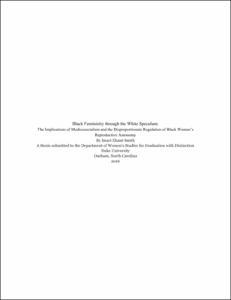 View / Download
1.6 Mb
Date
Authors
Smith, Imari Zhané
Smith, Imari
Advisor
Wald, Priscilla
Repository Usage Stats
584
views
1,036
downloads
Abstract
At the crux of health disparities for women of color lies a history of maltreatment based on racial difference from their white counterparts. It is their non-whiteness that limits their access to the ideologies of “woman” and “femininity” within dominant culture. As the result of this difference, the impact of the birth control movement varied among women based on race. This project explores how the ideology attributed to the black female body limited black women’s access to “womanhood” within dominant culture, and analyzes the manners in which their reproductive autonomy was compromised as the result of changes to that ideology through time. This project operates under the hypothesis that black women’s access to certain aspects of femininity such as domesticity and motherhood reflected their roles in slave society, that black women’s reproductive value was based on the value of black children within slave culture, and that both of these factors dictated the manner in which their reproductive autonomy was managed by health professionals. Black people’s worth as a free labor force within dominant culture diminished when the Reconstruction Amendments were added to the constitution and slavery was deemed unconstitutional—resulting in the paradigmatic shift from the promotion of black fertility to its recession. America’s transition to the medicosocial regulation of black fertility through Eugenics, the role of the black elite in the movement, and the negative impact of this agenda on the reproductive autonomy of black women from low socioeconomic backgrounds are enlisted as support. The paper goes on to draw connections between post-slavery ideology of black femininity and modern-day medicosocial occurrences within clinical settings in order to advocate for increased bias training for medical professionals as a means of combating current health disparities. It concludes with the possibility that this improvement in medical training could persuade people of color to seek out medical intervention at earlier stages of illness and obtain regular check-ups by actively countering physicians’ past transgressions against them.
Type
Honors thesis
Department
Women's Studies
Subject
black women
women's health
black femininity
medicosocial
reproductive autonomy
health disparities
Permalink
https://hdl.handle.net/10161/12725
Citation
Smith, Imari Zhané; & Smith, Imari (2016). Black Femininity through the White Speculum: The Implications of Medicosocialism and the Disproportionate Regulation of Black Women’s Reproductive Autonomy. Honors thesis, Duke University. Retrieved from https://hdl.handle.net/10161/12725.
Collections
More Info
Show full item record