Regulatory and cost barriers are likely to limit biosimilar development and expected savings in the near future. 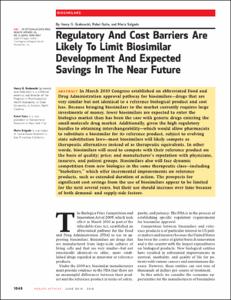 View / Download
298.7 Kb
Date
Authors
Grabowski, Henry G
Guha, Rahul
Salgado, Maria
Repository Usage Stats
422
views
472
downloads
Abstract
In March 2010 Congress established an abbreviated Food and Drug Administration approval pathway for biosimilars-drugs that are very similar but not identical to a reference biological product and cost less. Because bringing biosimilars to the market currently requires large investments of money, fewer biosimilars are expected to enter the biologics market than has been the case with generic drugs entering the small-molecule drug market. Additionally, given the high regulatory hurdles to obtaining interchangeability-which would allow pharmacists to substitute a biosimilar for its reference product, subject to evolving state substitution laws-most biosimilars will likely compete as therapeutic alternatives instead of as therapeutic equivalents. In other words, biosimilars will need to compete with their reference product on the basis of quality; price; and manufacturer's reputation with physicians, insurers, and patient groups. Biosimilars also will face dynamic competition from new biologics in the same therapeutic class-including "biobetters," which offer incremental improvements on reference products, such as extended duration of action. The prospects for significant cost savings from the use of biosimilars appear to be limited for the next several years, but their use should increase over time because of both demand- and supply-side factors.
Type
Journal article
Subject
Biotechnology
Health Spending
Pharmaceuticals
Biosimilar Pharmaceuticals
Cost Savings
Cost-Benefit Analysis
Drug Approval
Drug Costs
Economic Competition
Forecasting
Humans
Therapeutic Equivalency
United States
United States Food and Drug Administration
Permalink
https://hdl.handle.net/10161/12741
Published Version (Please cite this version)
10.1377/hlthaff.2013.0862
Publication Info
Grabowski, Henry G; Guha, Rahul; & Salgado, Maria (2014). Regulatory and cost barriers are likely to limit biosimilar development and expected savings in the near future. Health Aff (Millwood), 33(6). pp. 1048-1057. 10.1377/hlthaff.2013.0862. Retrieved from https://hdl.handle.net/10161/12741.
This is constructed from limited available data and may be imprecise. To cite this article, please review & use the official citation provided by the journal.
Collections
More Info
Show full item record

Professor Emeritus of Economics
Professor Grabowski specializes in the investigation of economics in the pharmaceutical industry, government regulation of business, and the economics of innovation. His specific interests within these fields include intellectual property and generic competition issues, the effects of government policy actions, and the costs and returns to pharmaceutical R&D. He has been publishing research papers for over four decades, from his earlier work, “The Effects of Regulatory Policy on the Incentives