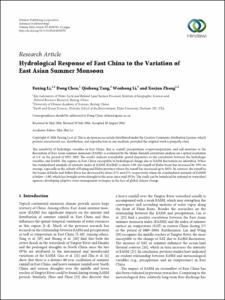 View / Download
3.3 Mb
Date
Authors
Li, F
Chen, D
Tang, Q
Li, W
Zhang, X
Repository Usage Stats
346
views
208
downloads
Abstract
Copyright © 2016 Fuxing Li et al.The sensitivity of hydrologic variables in East China, that is, runoff, precipitation, evapotranspiration, and soil moisture to the fluctuation of East Asian summer monsoon (EASM), is evaluated by the Mann-Kendall correlation analysis on a spatial resolution of 1/4° in the period of 1952-2012. The results indicate remarkable spatial disparities in the correlation between the hydrologic variables and EASM. The regions in East China susceptible to hydrological change due to EASM fluctuation are identified. When the standardized anomaly of intensity index of EASM (EASMI) is above 1.00, the runoff of Haihe basin has increased by 49% on average, especially in the suburb of Beijing and Hebei province where the runoff has increased up to 105%. In contrast, the runoff in the basins of Haihe and Yellow River has decreased by about 27% and 17%, respectively, when the standardized anomaly of EASMI is below -1.00, which has brought severe drought to the areas since mid-1970s. The study can be beneficial for national or watershed agencies developing adaptive water management strategies in the face of global climate change.
Type
Journal article
Permalink
https://hdl.handle.net/10161/12777
Published Version (Please cite this version)
10.1155/2016/4038703
Publication Info
Li, F; Chen, D; Tang, Q; Li, W; & Zhang, X (2016). Hydrological Response of East China to the Variation of East Asian Summer Monsoon. Advances in Meteorology, 2016. 10.1155/2016/4038703. Retrieved from https://hdl.handle.net/10161/12777.
This is constructed from limited available data and may be imprecise. To cite this article, please review & use the official citation provided by the journal.
Collections
More Info
Show full item record Associate Professor of Climate
Dr. Li's research interests focus primarily on climate dynamics, land-atmosphere interaction, hydroclimatology, and climate modeling. Her current research is to understand how the hydrological cycle changes in the current and future climate and their impacts on the ecosystems, subtropical high variability and change, unforced global temperature variability, and climate and health issues.