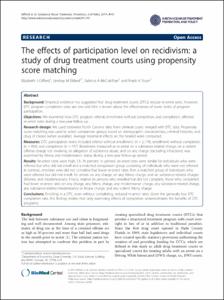 View / Download
277.5 Kb
Date
Authors
Gifford, Elizabeth J
Eldred, Lindsey M
McCutchan, Sabrina A
Sloan, Frank A
Repository Usage Stats
137
views
109
downloads
Abstract
BACKGROUND: Empirical evidence has suggested that drug treatment courts (DTCs) reduce re-arrest rates. However, DTC program completion rates are low and little is known about the effectiveness of lower levels of program participation. OBJECTIVES: We examined how DTC program referral, enrollment without completion, and completion, affected re-arrest rates during a two-year follow-up. RESEARCH DESIGN: We used statewide North Carolina data from criminal courts merged with DTC data. Propensity score matching was used to select comparison groups based on demographic characteristics, criminal histories, and drug of choice (when available). Average treatment effects on the treated were computed. MEASURES: DTC participation levels included referral without enrollment, (n = 2,174), enrollment without completion (n = 954), and completion (n = 747). Recidivism measured as re-arrest on a substance-related charge, on a violent offense charge not involving an allegation of substance abuse, and on any charge (excluding infractions) was examined by felony and misdemeanor status during a two-year follow-up period. RESULTS: Re-arrest rates were high, 53-76 percent. In general, re-arrest rates were similar for individuals who were referred but who did not enroll and a matched comparison group consisting of individuals who were not referred. In contrast, enrollees who did not complete had lower re-arrest rates than a matched group of individuals who were referred but did not enroll, for arrests on any charge, on any felony charge, and on substance-related charges (felonies and misdemeanors). Finally, relative to persons who enrolled but did not complete, those who completed had lower re-arrest rates on any charge, any felony charge, any misdemeanor charge, any substance-related charge, any substance-related misdemeanor or felony charge, and any violent felony charge. CONCLUSIONS: Enrolling in a DTC, even without completing, reduced re-arrest rates. Given the generally low DTC completion rate, this finding implies that only examining effects of completion underestimates the benefits of DTC programs.
Type
Journal article
Subject
Adult
Crime
Criminology
Female
Humans
Male
North Carolina
Propensity Score
Recurrence
Substance-Related Disorders
Permalink
https://hdl.handle.net/10161/12793
Published Version (Please cite this version)
10.1186/1747-597X-9-40
Publication Info
Gifford, Elizabeth J; Eldred, Lindsey M; McCutchan, Sabrina A; & Sloan, Frank A (2014). The effects of participation level on recidivism: a study of drug treatment courts using propensity score matching. Subst Abuse Treat Prev Policy, 9. pp. 40. 10.1186/1747-597X-9-40. Retrieved from https://hdl.handle.net/10161/12793.
This is constructed from limited available data and may be imprecise. To cite this article, please review & use the official citation provided by the journal.
Collections
More Info
Show full item record

Staff
Lindsey Eldred Kozecke is a Research Scholar at Duke University. She first joined Duke in 2005, shortly after earning her law degree from Benjamin Cardozo School of Law. She began her research at Duke in the Center for Health Policy (now known as the Global Health Institute), and joined the Department of Economics in 2009. Ms. Eldred Kozecke focuses her research on the intersection of health and the law. Her current research focuses on substance use and misuse, treatment courts, and legal levers J. Alexander McMahon Distinguished Professor Emeritus of Health Policy and Management
Professor Sloan is interested in studying the subjects of health policy and the economics of aging, hospitals, health, pharmaceuticals, and substance abuse. He has received funding from numerous research grants that he earned for studies of which he was the principal investigator. His most recent grants were awarded by the Robert Wood Johnson Foundation, the Center for Disease Control, the Pew Charitable Trust, and the National Institute on Aging. Titles of his projects include, “Why Mature S
Alphabetical list of authors with Scholars@Duke profiles.