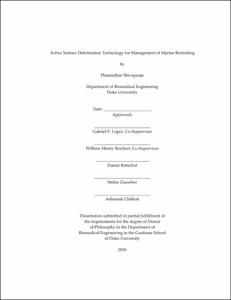 Biofouling, the accumulation of biomolecules, cells, organisms and their deposits on submerged and implanted surfaces, is a ubiquitous problem across various human endeavors including maritime operations, medicine, food industries and biotechnology. Since several decades, there have been substantial research efforts towards developing various types of antifouling and fouling release approaches to control bioaccumulation on man-made surfaces. In this work we hypothesized, investigated and developed dynamic change of the surface area and topology of elastomers as a general approach for biofouling management. Further, we combined dynamic surface deformation of elastomers with other existing antifouling and fouling-release approaches to develop multifunctional, pro-active biofouling control strategies.

This research work was focused on developing fundamental, new and environment-friendly approaches for biofouling management with emphasis on marine model systems and applications, but which also provided fundamental insights into the control of infectious biofilms on biomedical devices. We used different methods (mechanical stretching, electrical-actuation and pneumatic-actuation) to generate dynamic deformation of elastomer surfaces. Our initial studies showed that dynamic surface deformation methods are effective in detaching laboratory grown bacterial biofilms and barnacles. Further systematic studies revealed that a threshold critical surface strain is required to debond a biofilm from the surface, and this critical strain is dependent on the biofilm mechanical properties including adhesion energy, thickness and modulus. To test the dynamic surface deformation approach in natural environment, we conducted field studies (at Beaufort, NC) in natural seawater using pneumatic-actuation of silicone elastomer. The field studies also confirmed that a critical substrate strain is needed to detach natural biofilm accumulated in seawater. Additionally, the results from the field studies suggested that substrate modulus also affect the critical strain needed to debond biofilms. To sum up, both the laboratory and the field studies proved that dynamic surface deformation approach can effectively detach various biofilms and barnacles, and therefore offers a non-toxic and environmental friendly approach for biofouling management.

Deformable elastomer systems used in our studies are easy to fabricate and can be used as complementary approach for existing commercial strategies for biofouling control. To this end, we aimed towards developed proactive multifunctional surfaces and proposed two different approaches: (i) modification of elastomers with antifouling polymers to produce multifunctional, and (ii) incorporation of silicone-oil additives into the elastomer to enhance fouling-release performance.

In approach (i), we modified poly(vinylmethylsiloxane) elastomer surfaces with zwitterionic polymers using thiol-ene click chemistry and controlled free radical polymerization. These surfaces exhibited both fouling resistance and triggered fouling-release functionalities. The zwitterionic polymers exhibited fouling resistance over short-term (∼hours) exposure to bacteria and barnacle cyprids. The biofilms that eventually accumulated over prolonged-exposure (∼days) were easily detached by applying mechanical strain to the elastomer substrate. In approach (ii), we incorporated silicone-oil additives in deformable elastomer and studied synergistic effect of silicone-oils and surface strain on barnacle detachment. We hypothesized that incorporation of silicone-oil additive reduces the amount of surface strain needed to detach barnacles. Our experimental results supported the above hypothesis and suggested that surface-action of silicone-oils plays a major role in decreasing the strain needed to detach barnacles. Further, we also examined the effect of change in substrate modulus and showed that stiffer substrates require lower amount of strain to detach barnacles.