Theory and Practice in Sustainability Science: Influence of Urban Form on the Urban Heat Island and Implications for Urban Systems 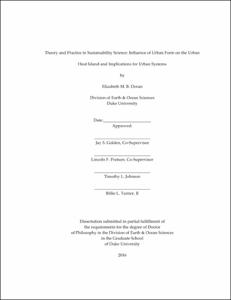 As the world population continues to grow past seven billion people and global challenges continue to persist including resource availability, biodiversity loss, climate change and human well-being, a new science is required that can address the integrated nature of these challenges and the multiple scales on which they are manifest. Sustainability science has emerged to fill this role. In the fifteen years since it was first called for in the pages of Science, it has rapidly matured, however its place in the history of science and the way it is practiced today must be continually evaluated. In Part I, two chapters address this theoretical and practical grounding. Part II transitions to the applied practice of sustainability science in addressing the urban heat island (UHI) challenge wherein the climate of urban areas are warmer than their surrounding rural environs. The UHI has become increasingly important within the study of earth sciences given the increased focus on climate change and as the balance of humans now live in urban areas.

In Chapter 2 a novel contribution to the historical context of sustainability is argued. Sustainability as a concept characterizing the relationship between humans and nature emerged in the mid to late 20th century as a response to findings used to also characterize the Anthropocene. Emerging from the human-nature relationships that came before it, evidence is provided that suggests Sustainability was enabled by technology and a reorientation of world-view and is unique in its global boundary, systematic approach and ambition for both well being and the continued availability of resources and Earth system function. Sustainability is further an ambition that has wide appeal, making it one of the first normative concepts of the Anthropocene.

Despite its widespread emergence and adoption, sustainability science continues to suffer from definitional ambiguity within the academe. In Chapter 3, a review of efforts to provide direction and structure to the science reveals a continuum of approaches anchored at either end by differing visions of how the science interfaces with practice (solutions). At one end, basic science of societally defined problems informs decisions about possible solutions and their application. At the other end, applied research directly affects the options available to decision makers. While clear from the literature, survey data further suggests that the dichotomy does not appear to be as apparent in the minds of practitioners.

In Chapter 4, the UHI is first addressed at the synoptic, mesoscale. Urban climate is the most immediate manifestation of the warming global climate for the majority of people on earth. Nearly half of those people live in small to medium sized cities, an understudied scale in urban climate research. Widespread characterization would be useful to decision makers in planning and design. Using a multi-method approach, the mesoscale UHI in the study region is characterized and the secular trend over the last sixty years evaluated. Under isolated ideal conditions the findings indicate a UHI of 5.3 ± 0.97 °C to be present in the study area, the magnitude of which is growing over time.

Although urban heat islands (UHI) are well studied, there remain no panaceas for local scale mitigation and adaptation methods, therefore continued attention to characterization of the phenomenon in urban centers of different scales around the globe is required. In Chapter 5, a local scale analysis of the canopy layer and surface UHI in a medium sized city in North Carolina, USA is conducted using multiple methods including stationary urban sensors, mobile transects and remote sensing. Focusing on the ideal conditions for UHI development during an anticyclonic summer heat event, the study observes a range of UHI intensity depending on the method of observation: 8.7 °C from the stationary urban sensors; 6.9 °C from mobile transects; and, 2.2 °C from remote sensing. Additional attention is paid to the diurnal dynamics of the UHI and its correlation with vegetation indices, dewpoint and albedo. Evapotranspiration is shown to drive dynamics in the study region.

Finally, recognizing that a bridge must be established between the physical science community studying the Urban Heat Island (UHI) effect, and the planning community and decision makers implementing urban form and development policies, Chapter 6 evaluates multiple urban form characterization methods. Methods evaluated include local climate zones (LCZ), national land cover database (NCLD) classes and urban cluster analysis (UCA) to determine their utility in describing the distribution of the UHI based on three standard observation types 1) fixed urban temperature sensors, 2) mobile transects and, 3) remote sensing. Bivariate, regression and ANOVA tests are used to conduct the analyses. Findings indicate that the NLCD classes are best correlated to the UHI intensity and distribution in the study area. Further, while the UCA method is not useful directly, the variables included in the method are predictive based on regression analysis so the potential for better model design exists. Land cover variables including albedo, impervious surface fraction and pervious surface fraction are found to dominate the distribution of the UHI in the study area regardless of observation method.

Chapter 7 provides a summary of findings, and offers a brief analysis of their implications for both the scientific discourse generally, and the study area specifically. In general, the work undertaken does not achieve the full ambition of sustainability science, additional work is required to translate findings to practice and more fully evaluate adoption. The implications for planning and development in the local region are addressed in the context of a major light-rail infrastructure project including several systems level considerations like human health and development. Finally, several avenues for future work are outlined. Within the theoretical development of sustainability science, these pathways include more robust evaluations of the theoretical and actual practice. Within the UHI context, these include development of an integrated urban form characterization model, application of study methodology in other geographic areas and at different scales, and use of novel experimental methods including distributed sensor networks and citizen science.