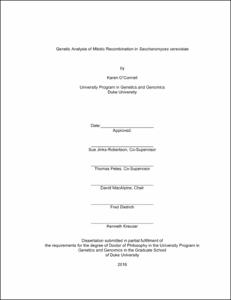 Mitotic genome instability can occur during the repair of double-strand breaks (DSBs) in DNA, which arise from endogenous and exogenous sources. Studying the mechanisms of DNA repair in the budding yeast, Saccharomyces cerevisiae has shown that Homologous Recombination (HR) is a vital repair mechanism for DSBs. HR can result in a crossover event, in which the broken molecule reciprocally exchanges information with a homologous repair template. The current model of double-strand break repair (DSBR) also allows for a tract of information to non-reciprocally transfer from the template molecule to the broken molecule. These “gene conversion” events can vary in size and can occur in conjunction with a crossover event or in isolation. The frequency and size of gene conversions in isolation and gene conversions associated with crossing over has been a source of debate due to the variation in systems used to detect gene conversions and the context in which the gene conversions are measured.

DSBs can arise from endogenous cellular processes such as replication and transcription. Two important RNA/DNA hybrids are involved in replication and transcription: R-loops, which form when an RNA transcript base pairs with the DNA template and displaces the non-template DNA strand, and ribonucleotides embedded into DNA (rNMPs), which arise when replicative polymerase errors insert ribonucleotide instead of deoxyribonucleotide triphosphates. RNaseH1 (encoded by RNH1) and RNaseH2 (whose catalytic subunit is encoded by RNH201) both recognize and degrade the RNA in within R-loops while RNaseH2 alone recognizes, nicks, and initiates removal of rNMPs embedded into DNA. Due to their redundant abilities to act on RNA:DNA hybrids, aberrant removal of rNMPs from DNA has been thought to lead to genome instability in an rnh201Δ background.

In Chapter 3, I characterize (1) non-selective genome-wide homologous recombination events and (2) crossing over on chromosome IV in mutants defective in RNaseH1, RNaseH2, or RNaseH1 and RNaseH2. Using a mutant DNA polymerase that incorporates 4-fold fewer rNMPs than wild type, I demonstrate that the primary recombinogenic lesion in the RNaseH2-defective genome is not rNMPs, but rather R-loops. This work suggests different in-vivo roles for RNaseH1 and RNaseH2 in resolving R-loops in yeast and is consistent with R-loops, not rNMPs, being the the likely source of pathology in Aicardi-Goutières Syndrome patients defective in RNaseH2.