Delivery and Scavenging of Nucleic Acids by Polycationic Polymers 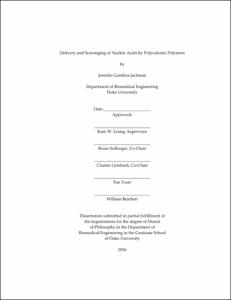 Non-viral gene therapy may be an attractive alternative to chronic protein replacement therapy. Orally administered non-viral gene vectors have been investigated for more than one decade with little progress made beyond the initial studies. Oral administration has many benefits over intravenous injection including patient compliance and overall cost; however, effective oral gene delivery systems remain elusive. To date, only chitosan carriers have demonstrated successful oral gene delivery due to chitosan’s stability via the oral route. In this study, we increase the transfection efficiency of the chitosan gene carrier by adding protamine sulfate to the nanoparticle formulation. The addition of protamine sulfate to the chitosan nanoparticles results in up to 42x higher in vitro transfection efficiency than chitosan nanoparticles without protamine sulfate. Therapeutic levels of hFIX protein are detected after oral delivery of Ch/PS/phFIX nanoparticles in 5/12 mice in vivo, ranging from 3 -132 ng/mL, as compared to levels below 4 ng/mL in 1/12 mice given Ch/phFIX nanoparticles. These results indicate the protamine sulfate enhances the transfection efficiency of chitosan and should be considered as an effective ternary component for applications in oral gene delivery.

An understandable way to clinically apply the NASF is as a wound bandage. Chronic wounds are a serious clinical problem that is attributed to an extended period of inflammation as well as the presence of biofilms. An NASF bandage can potentially have two benefits in the treatment of chronic wounds by reducing the inflammation and preventing biofilm formation. NASF can prevent biofilm formation by reducing the NA present in the wound bed, therefore removing large components of what the bacteria use to develop their biofilm matrix, the extracellular polymeric substance, without which the biofilm cannot develop. The NASF described above is used to show the effect of the nucleic acid scavenging technology on in vitro and in vivo biofilm formation of P. aeruginosa, S. aureus, and S. epidermidis biofilms. The in vitro studies demonstrated that the NASFs were able to significantly reduce the biofilm formation in all three bacterial strains. In vivo studies of the NASF on mouse wounds infected with biofilm show that the NASF retain their functionality and are able to scavenge DNA, RNA, and protein from the wound bed. The NASF remove DNA that are maintaining the inflammatory state of the open wound and contributing to the extracellular polymeric substance (EPS), such as mtDNA, and also removing proteins that are required for bacteria/biofilm formation and maintenance such as chaperonin, ribosomal proteins, succinyl CoA-ligase, and polymerases. However, the NASF are not successful at decreasing the wound healing time because their repeated application and removal disrupts the wound bed and removes proteins required for wound healing such as fibronectin, vibronectin, keratin, and plasminogen. Further optimization of NASF treatment duration and potential combination treatments should be tested to reduce the unwanted side effects of increased wound healing time.