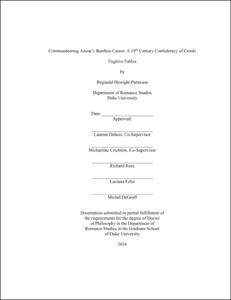 In my thesis, “Commandeering Aesop’s Bamboo Canon: A 19th Century Confederacy of Creole Fugitive Fables,” I ask and answer the ‘Who? What? Where? When? Why?” of Creole Literature using the 19th century production of Aesopian fables as clues to resolve a set of linguistic, historical, literary, and geographical enigmas pertaining the ‘birth-place(s)’ of Creolophone Literatures in the Caribbean Sea, North and South America, as well as the Indian Ocean. Focusing on the fables in Martinique (1846), Reunion Island (1826), and Mauritius (1822), my thesis should read be as an attempt capture the links between these islands through the creation of a particular archive defined as a cartulary-chronicle, a diplomatic codex, or simply a map in which I chart and trace the flight of the founding documents relating to the lives of the individual authors, editors, and printers in order to illustrate the articulation of a formal and informal confederation that enabled the global and local institutional promotion of Creole Literature. While I integrate various genres and multi-polar networks between the authors of this 19th century canon comprised of sacred and secular texts such as proclamations, catechisms, and proverbs, the principle literary genre charted in my thesis are collections of fables inspired by French 17th century French Classical fabulist, Jean de la Fontaine. Often described as the ‘matrix’ of Creolophone Literature, these blues and fables constitute the base of the canon, and are usually described as either ‘translated,’ ‘adapted,’ and even ‘cross-dressed’ into Creole in all of the French Creolophone spaces. My documentation of their transnational sprouting offers proof of an opaque canonical formation of Creole popular literature. By constituting this archive, I emphasize the fact that despite 200 years of critical reception and major developments and discoveries on behalf of Creole language pedagogues, literary scholars, linguists, historians, librarians, archivist, and museum curators, up until now not only have none have curated this literature as a formal canon. I also offer new empirical evidence in order to try and solve the enigma of “How?” the fables materially circulated between the islands, and seek to come to terms with the anonymous nature of the texts, some of which were published under pseudonyms. I argue that part of the confusion on the part of scholars has been the result of being willfully taken by surprise or defrauded by the authors, or ‘bamboozled’ as I put it. The major paradigmatic shift in my thesis is that while I acknowledge La Fontaine as the base of this literary canon, I ultimately bypass him to trace the ancient literary genealogy of fables to the infamous Aesop the Phrygian, whose biography – the first of a slave in the history of the world – and subsequent use of fables reflects a ‘hidden transcript’ of ‘masked political critique’ between ‘master and slave classes’ in the 4th Century B.C.E. Greece.

This archive draws on, connects and critiques the methodologies of several disciplinary fields. I use post-colonial literary studies to map the literary genealogies Aesop; use a comparative historical approach to the abolitions of slavery in both the 19th century Caribbean and the Indian Ocean; and chart the early appearance of folk music in early colonial societies through Musicology and Performance Studies. Through the use of Sociolinguistics and theories of language revival, ecology, and change, I develop an approach of ‘reflexive Creolistics’ that I ultimately hope will offer new educational opportunities to Creole speakers. While it is my desire that this archive serves linguists, book collectors, and historians for further scientific inquiry into the innate international nature of Creole language, I also hope that this innovative material defense and illustration of Creole Literature will transform the consciousness of Creolophones (native and non-native) who too remain ‘bamboozled’ by the archive. My goal is to erase the ‘unthinkability’ of the existence of this ancient maritime creole literary canon from the collective cultural imaginary of readers around the globe.