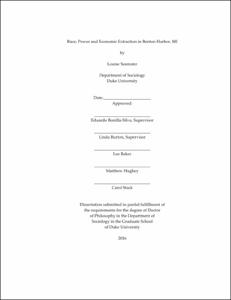 My dissertation investigates twin financial interventions—urban development and emergency management—in a single small town. Once a thriving city drawing blacks as blue-collar workers during the Great Migration, Benton Harbor, Michigan has suffered from waves of out-migration, debt, and alleged poor management. Benton Harbor’s emphasis on high-end economic development to attract white-collar workers and tourism, amidst the poverty, unemployment, and disenfranchisement of black residents, highlights an extreme case of American urban inequality. At the same time, many bystanders and representative observers argue that this urban redevelopment scheme and the city’s takeover by the state represent Benton Harbor residents’ only hope for a better life. I interviewed 44 key players and observers in local politics and development, attended 20 public meetings, conducted three months of observations, and collected extensive archival data. Examining Benton Harbor’s time under emergency management and its luxury golf course development as two exemplars of a larger relationship, I find that the top-down processes allegedly intended to alleviate Benton Harbor’s inequality actually reproduce and deepen the city’s problems. I propose that the beneficiaries of both plans constitute a white urban regime active in Benton Harbor. I show how the white urban regime serves its interests by operating an extraction machine in the city, which serves to reproduce local poverty and wealth by directing resources toward the white urban regime and away from the city.