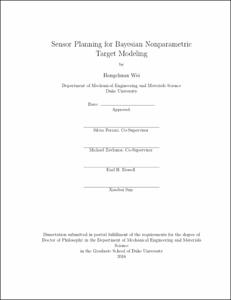 Novel information theoretic functions are developed for these introduced Bayesian nonparametric target kinematics models to represent the expected utility of measurements as a function of sensor control inputs and random environmental variables. A Gaussian process expected Kullback Leibler divergence is developed as the expectation of the KL divergence between the current (prior) and posterior Gaussian process target kinematics models with respect to the future measurements. Then, this approach is extended to develop a new information value function that can be used to estimate target kinematics described by a Dirichlet process-Gaussian process mixture model. A theorem is proposed that shows the novel information theoretic functions are bounded. Based on this theorem, efficient estimators of the new information theoretic functions are designed, which are proved to be unbiased with the variance of the resultant approximation error decreasing linearly as the number of samples increases. Computational complexities for optimizing the novel information theoretic functions under sensor dynamics constraints are studied, and are proved to be NP-hard. A cumulative lower bound is then proposed to reduce the computational complexity to polynomial time.

Three sensor planning algorithms are developed according to the assumptions on the target kinematics and the sensor dynamics. For problems where the control space of the sensor is discrete, a greedy algorithm is proposed. The efficiency of the greedy algorithm is demonstrated by a numerical experiment with data of ocean currents obtained by moored buoys. A sweep line algorithm is developed for applications where the sensor control space is continuous and unconstrained. Synthetic simulations as well as physical experiments with ground robots and a surveillance camera are conducted to evaluate the performance of the sweep line algorithm. Moreover, a lexicographic algorithm is designed based on the cumulative lower bound of the novel information theoretic functions, for the scenario where the sensor dynamics are constrained. Numerical experiments with real data collected from indoor pedestrians by a commercial pan-tilt camera are performed to examine the lexicographic algorithm. Results from both the numerical simulations and the physical experiments show that the three sensor planning algorithms proposed in this dissertation based on the novel information theoretic functions are superior at learning the target kinematics with

little or no prior knowledge