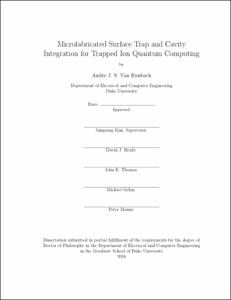 Atomic ions trapped in microfabricated surface traps can be utilized as a physical platform with which to build a quantum computer. They possess many of the desirable characteristics of such a device, including high fidelity state preparation and readout, universal logic gates, and long coherence times, and can be readily entangled with each other through photonic interconnects. The use of optical cavities integrated with trapped ion qubits as a photonic interface presents the possibility for order of magnitude improvements in performance in several key areas for their use in quantum computation. The first part of this thesis describes the design and fabrication of a novel surface trap for integration with an optical cavity. The trap is custom made on a highly reflective mirror surface and includes the capability of moving the ion trap location along all three trap axes with nanometer scale precision. The second part of this thesis demonstrates the suitability of small microcavities formed from laser ablated, fused silica substrates with radii of curvature in the 300-500 micron range for use with the mirror trap as part of an integrated ion trap cavity system. Quantum computing applications for such a system include dramatic improvements in the photon entanglement rate of up to 10 kHz, the qubit measurement time down to 1 microsecond, and the qubit measurement error rate down to the 1e-5 range. The final part of this thesis describes a performance simulator for exploring the physical resource requirements and performance demands to scale a quantum computer to sizes capable of implementing quantum algorithms beyond the limits of classical computation.