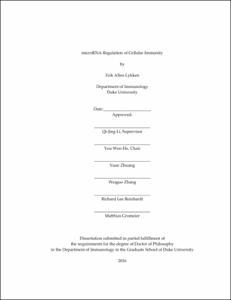 Immunity is broadly defined as a mechanism of protection against non-self entities, a process which must be sufficiently robust to both eliminate the initial foreign body and then be maintained over the life of the host. Life-long immunity is impossible without the development of immunological memory, of which a central component is the cellular immune system, or T cells. Cellular immunity hinges upon a naïve T cell pool of sufficient size and breadth to enable Darwinian selection of clones responsive to foreign antigens during an initial encounter. Further, the generation and maintenance of memory T cells is required for rapid clearance responses against repeated insult, and so this small memory pool must be actively maintained by pro-survival cytokine signals over the life of the host.

T cell development, function, and maintenance are regulated on a number of molecular levels through complex regulatory networks. Recently, small non-coding RNAs, miRNAs, have been observed to have profound impacts on diverse aspects of T cell biology by impeding the translation of RNA transcripts to protein. While many miRNAs have been described that alter T cell development or functional differentiation, little is known regarding the role that miRNAs have in T cell maintenance in the periphery at homeostasis.

In Chapter 3 of this dissertation, tools to study miRNA biology and function were developed. First, to understand the effect that miRNA overexpression had on T cell responses, a novel overexpression system was developed to enhance the processing efficiency and ultimate expression of a given miRNA by placing it within an alternative miRNA backbone. Next, a conditional knockout mouse system was devised to specifically delete miR-191 in a cell population expressing recombinase. This strategy was expanded to permit the selective deletion of single miRNAs from within a cluster to discern the effects of specific miRNAs that were previously inaccessible in isolation. Last, to enable the identification of potentially therapeutically viable miRNA function and/or expression modulators, a high-throughput flow cytometry-based screening system utilizing miRNA activity reporters was tested and validated. Thus, several novel and useful tools were developed to assist in the studies described in Chapter 4 and in future miRNA studies.

In Chapter 4 of this dissertation, the role of miR-191 in T cell biology was evaluated. Using tools developed in Chapter 3, miR-191 was observed to be critical for T cell survival following activation-induced cell death, while proliferation was unaffected by alterations in miR-191 expression. Loss of miR-191 led to significant decreases in the numbers of CD4+ and CD8+ T cells in the periphery lymph nodes, but this loss had no impact on the homeostatic activation of either CD4+ or CD8+ cells. These peripheral changes were not caused by gross defects in thymic development, but rather impaired STAT5 phosphorylation downstream of pro-survival cytokine signals. miR-191 does not specifically inhibit STAT5, but rather directly targets the scaffolding protein, IRS1, which in turn alters cytokine-dependent signaling. The defect in peripheral T cell maintenance was exacerbated by the presence of a Bcl-2YFP transgene, which led to even greater peripheral T cell losses in addition to developmental defects. These studies collectively demonstrate that miR-191 controls peripheral T cell maintenance by modulating homeostatic cytokine signaling through the regulation of IRS1 expression and downstream STAT5 phosphorylation.

The studies described in this dissertation collectively demonstrate that miR-191 has a profound role in the maintenance of T cells at homeostasis in the periphery. Importantly, the manipulation of miR-191 altered immune homeostasis without leading to severe immunodeficiency or autoimmunity. As much data exists on the causative agents disrupting active immune responses and the formation of immunological memory, the basic processes underlying the continued maintenance of a functioning immune system must be fully characterized to facilitate the development of methods for promoting healthy immune function throughout the life of the individual. These findings also have powerful implications for the ability of patients with modest perturbations in T cell homeostasis to effectively fight disease and respond to vaccination and may provide valuable targets for therapeutic intervention.