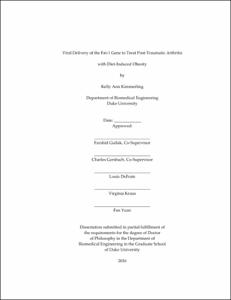 Post-traumatic arthritis (PTA) is arthritis that develops following joint injury, including meniscus and ligament tears. Current treatments for PTA range from over-the-counter medication to knee replacement; however, in the presence of obesity, the levels of pro-inflammatory cytokines, such as interleukin-1 (IL-1) and tumor necrosis factor alpha (TNF-α,) are more elevated than in non-obese individuals. The role of fatty acids, obesity, and PTA has been examined, with omega-3 fatty acids showing promise as an anti-inflammatory after injury due to its ability to suppress IL-1 and TNF-α. Due to the difficulty in switching patients’ diets, an alternative solution to increasing omega-3 levels needs to be developed. The Fat-1 enzyme, an omega-3 desaturase that has the ability to convert omega-6 to omega-3 fatty acids, may be a good target for increasing the omega-3 levels in the body.

In the first study, we examined whether Fat-1 transgenic mice on a high-fat diet would exhibit lower levels of PTA degeneration following the destabilization of the medial meniscus (DMM). Both male and female Fat-1 and wild-type (WT) littermates were put on either a control diet (10% fat) or an omega-6 rich high-fat diet (60% fat) and underwent DMM surgery. Arthritic changes were examined 12 weeks post-surgery. Fat-1 mice on both the control and high-fat diet showed protection from PTA-related degeneration, while WT mice showed severe arthritic changes. These findings suggest that the omega-6/omega-3 ratio plays an important role in reducing PTA following injury, and demonstrates the potential therapeutic benefit of the Fat-1 enzyme in preventing PTA in both normal and obese patients following acute injury.

Following this, we needed to establish a translatable delivery mechanism for getting the Fat-1 enzyme, which is not present in mammalian cells, into patients. In the second study, we examined whether anti-inflammatory gene delivery of the Fat-1 enzyme would prevent PTA following DMM surgery. In vitro testing of both lentivirus (LV) and adeno-associated virus (AAV) was completed to confirm functionality and conformation of the Fat-1 enzyme after transduction. Male WT mice were placed on an omega-6 rich high-fat diet (60% fat) and underwent DMM surgery; either local or systemic AAV injections of the Fat-1 enzyme or Luciferase, a vector control, were given immediately following surgery. 12 weeks post-surgery, arthritic changes were assessed. The systemic administration of the Fat-1 enzyme showed protection from synovial inflammation and osteophyte formation, while administration of Luciferase did not confer protection. These findings suggest the utility of gene therapy to deliver the Fat-1 enzyme, which has potential as a therapeutic for injured obese patients for the prevention of PTA.