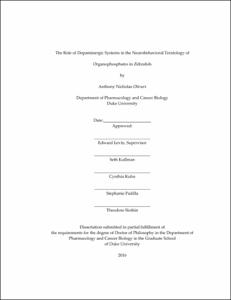 Background: Organophosphate (OP) pesticides are well-known developmental neurotoxicants that have been linked to abnormal cognitive and behavioral endpoints through both epidemiological studies and animal models of behavioral teratology, and are implicated in the dysfunction of multiple neurotransmitters, including dopamine. Chemical similarities between OP pesticides and organophosphate flame retardants (OPFRs), a class of compounds growing in use and environmental relevance, have produced concern regarding whether developmental exposures to OPFRs and OP pesticides may share behavioral outcomes, impacts on dopaminergic systems, or both. Methods: Using the zebrafish animal model, we exposed developing fish to two OPFRs, TDCIPP and TPHP, as well as the OP pesticide chlorpyrifos, during the first 5 days following fertilization. From there, the exposed fish were assayed for behavioral abnormalities and effects on monoamine neurochemistry as both larvae and adults. An experiment conducted in parallel examined how antagonism of the dopamine system during an identical window of development could alter later life behavior in the same assays. Finally, we investigated the interaction between developmental exposure to an OPFR and acute dopamine antagonism in larval behavior. Results: Developmental exposure to all three OP compounds altered zebrafish behavior, with effects persisting into adulthood. Additionally, exposure to an OPFR decreased the behavioral response to acute D2 receptor antagonism in larvae. However, the pattern of behavioral effects diverged substantially from those seen following developmental dopamine antagonism, and the investigations into dopamine neurochemistry were too variable to be conclusive. Thus, although the results support the hypothesis that OPFRs, as with OP pesticides such as chlorpyrifos, may present a risk to normal behavioral development, we were unable to directly link these effects to any dopaminergic dysfunction.