The Response of Hot QCD Matter to Hard Partons 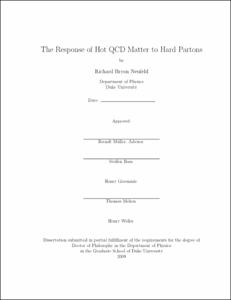 The quark gluon plasma (QGP) forms when matter governed by quantum chromodynamics (QCD) undergoes a transition at high temperature or high density from hadronic bound states to deconfined quarks and gluons. The QGP at high temperature is believed to be experimentally accessible in relativistic heavy-ion collisions, such as those done at the Relativistic Heavy-Ion Collider (RHIC) at Brookhaven National Lab and in the near future at the Large Hadron Collider (LHC) at CERN. The results obtained so far reveal the production of energetic (hard) partons in the early stages of a heavy-ion collision which propagate through the plasma. Results also show that the QGP produced at RHIC is a nearly ideal fluid and that hard partons may generate conical, Mach-like, disturbances in the QGP.