FtsZ Protofilament Curvature is the Opposite of Tubulin Rings 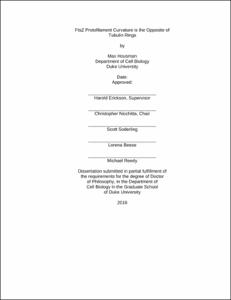 Bacterial tubulin homolog FtsZ assembles straight protofilaments (pfs) that form the scaffold of the cytokinetic Z ring. These pfs can adopt a curved conformation forming a miniring or spiral tube 24 nm in diameter. Tubulin pfs also have a curved conformation, forming 42 nm tubulin rings. We have previously provided evidence that FtsZ generates a constriction force by switching from straight pfs to the curved conformation, generating a bending force on the membrane. In the simplest model the membrane tether, which exits from the C terminus of the globular FtsZ, would have to be on the outside of the curved pf. However, it is well established that tubulin rings have the C terminus on the inside of the ring. Could FtsZ and tubulin rings have the opposite curvature? In the present study we explored the direction of curvature of FtsZ rings by fusing large protein tags to the N or C terminus of the FtsZ globular domain. FtsZ with a protein tag on the N terminus did not assemble tubes. This was expected if the N terminus is on the inside, because the protein tags are too big to fit in the interior of the tube. FtsZ with C-terminal tags assembled normal tubes, consistent with the C terminus on the outside. The FN extension was not visible in negative stain, but thin section EM gave definitive evidence that the C-terminal tag was on the outside of the tubes. This has interesting implications for the evolution of tubulin. It seems likely that tubulin began with the curvature of FtsZ, which would have resulted in pfs curving toward the interior of a disassembling MT. Evolution not only eliminated this undesirable curvature, but managed to reverse direction to produce the outward curving rings, which is useful for pulling chromosomes.