Immunity in Caenorhabditis Elegans: a Tale of Two Transcription Factors 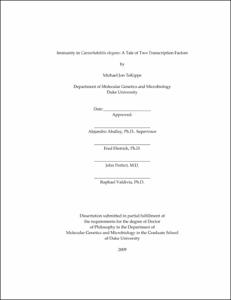 Recently, the study of invertebrate innate immunity has garnered considerable attention after the discovery that mammalian homologues of the <italic>Drosophila melanogaster</italic>

Toll pathway play a role in mammalian innate immunity. One invertebrate model system that has begun to be intensely studied is the nematode <italic>Caenorhabditis elegans</italic>. Immunity in <italic>C. elegans</italic> has been shown to be inducible in that it responds uniquely to different pathogens. These changes in gene expression require transcription factors in order for certain genes to be transcribed. We utilized an RNA interference screen of potential transcription factors to identify the GATA transcription factor ELT-2 as a possible transcription factor involved in immunity. We then demonstrated that ELT-2 was required for resistance to a wide range of pathogens and was responsible for regulating expression of the C-type lectin <italic>clec-67</italic>, a marker of immunity.

We also studied another transcription factor known to play a role in C. elegans immune function, the FOXO transcription factor DAF-16. We specifically focused in on the role of DAF-16 in germline-deficient mutants, and we demonstrated that such mutants are resistant to many different pathogens. This led to further investigation of the germline-deficient mutant glp-4, which should also show broad range resistance to pathogens but fails to do so. Through whole genome sequencing, we identified mutations that may be responsible for the glp-4 phenotype. We also demonstrated that DAF-16 was active in glp-4 mutants, leading to us proposing a model where glp-4 plays a role in influencing <italic>C. elegans</italic> immunity besides its involvement in germline development.