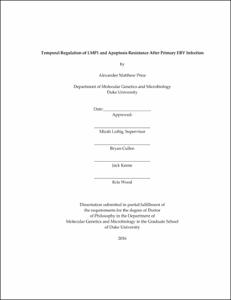 Epstein-Barr virus (EBV) is a ubiquitous human pathogen that establishes a lifelong latent infection in over ninety percent of all adult humans worldwide. While typically benign, EBV has been causally associated with a number of human malignancies in the settings of immune suppression, genetic, and/or environmental factors. While a highly successful pathogen based on prevalence, the ability of the virus to immortalize human B cells (a stage of infection thought to be critical for the establishment of latency) is quite poor. We hypothesize that the interactions between the virus and the human host early after infection are ultimately important for the outcome of viral latency establishment. To answer this question we broadly profiled primary human B cells at both early and late times after EBV infection to assay both host mRNA expression and the host-driven response to apoptotic stimuli. We found that EBV infection induces host gene expression signatures early after infection that are functionally distinct from the gene expression program late after infection. These studies also led to the novel discovery that viral gene expression is controlled differently early after infection, including the delayed expression of a viral protein that is critical for the establishment of latency. Furthermore, we have also shown that EBV can use a single viral protein to alter and repress host apoptotic sensitivity in the face of an anti-viral apoptotic response.