The Didache and Traditioned Innovation: Shaping Christian Community in the First Century and the Twenty-First Century 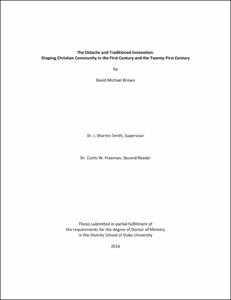 Church leaders, both lay and clergy, shape Christian community. Among their central tasks are: building communal identity, nurturing Christian practices, and developing faithful structures. When it comes to understanding the approach of the earliest Christian communities to these tasks, the Didache might well be the most important text most twenty-first century church leaders have never read. The Didache innovated on tradition, shaping the second generation of Christians to meet the crises and challenges of a changing world.

Most likely composed in the second half of the first century, the Didache served as a training manual for gentile converts to Christianity, preparing them for life in Christian community. This brief document, roughly one third the length of Mark’s gospel, developed within early Jewish-Christian communities. It soon found wide usage throughout the Mediterranean region, and its influence endured throughout the patristic and into the medieval period.

The Didache outlines emerging Christian practices that were rooted in both Jewish tradition and early Jesus material, yet were reaching forward in innovative ways. The Didache adopts historical teachings and practices and then adapts them for an evolving context. In this respect, the writers of the Didache, as well as the community shaped by its message, exemplify the pattern of thinking described by Greg Jones as “traditioned innovation.”

The Didache invites reflection on the shape and content of Christian community and Christian leadership in the twenty-first century. As churches and church leaders engage a rapidly changing world, the Didache is an unlikely and yet important conversation partner from two millennia ago. A quick read through its pages – a task accomplished in less than half an hour – brings the reader face to face with a brand of Christianity both very familiar and strikingly dissimilar to modern Christianity. Such dissonance challenges current assumptions about the church and creates a space in which to re-imagine our situation in light of this ancient Christian tradition. The Didache provides a window through which we might re-examine current conceptualizations of Christian life, liturgy, and leadership.

This thesis begins with an exploration of the form and function of the Didache and an examination of a number of important background issues for the informed study of the Didache. The central chapters of this thesis exegete and explore select passages in each of the three primary sections of the Didache – the Two Ways (Didache 1-6), the liturgical section (Didache 7-10), and the church order (Didache 11-15). In each instance, the composers of the Didache reach back into a cherished and life-giving aspect of the community’s heritage and shape it anew into a fresh and faithful approach to living the Christian life in a drastically different context.

The thesis concludes with three suggestions of how the Didache may provide a resource for the way the Church in the present thinks about training disciples, shaping community, and developing leadership structures. These conversation starters offer beginning points for a richer, fuller discussion of traditioned innovation in our current church context. The Didache provides a source of wisdom from our spiritual forebears that modern Christian leaders would do well not to ignore. With a look through the first century window of the Didache, twenty-first century Christians can discover fresh insights for shaping Christian community in the present.