In Whose Image: The Emergence, Development, and Challenge of African-American Evangelicalism 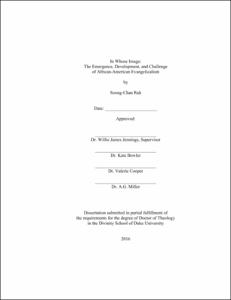 The current era of American Christianity marks the transition from a Western, white-dominated U.S. Evangelicalism to an ethnically diverse demographic for evangelicalism. Despite this increasing diversity, U.S. Evangelicalism has demonstrated a stubborn inability to address the entrenched assumption of white supremacy. The 1970s witnessed the rise in prominence of Evangelicalism in the United States. At the same time, the era witnessed a burgeoning movement of African-American evangelicals, who often experienced marginalization from the larger movement. What factors prevented the integration between two seemingly theologically compatible movements? How do these factors impact the challenge of integration and reconciliation in the changing demographic reality of early twenty-first Evangelicalism?