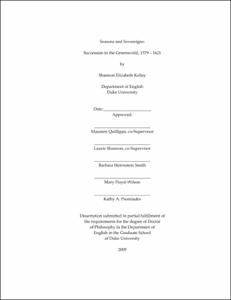 Current scholarship on months, seasons, and climates in Renaissance aesthetics has developed along the two-dimensional axis of pastoral and georgic, leaving critics unable to develop an overarching theory of how or why early modern subjects charted environmental stability over time. <bold>Seasons and Sovereigns</bold> addresses this occlusion by studying the course of nature as it pertains to sudden dissolution, long periods of stability, or constant change in volatile Elizabethan and early Stuart greenworlds.

While environmental stability occupies a central role in two theories of sovereignty - the classical Golden Age, which experienced eternal Spring, and the two-bodied King, where a King's body politic transcends the vicissitude signified by seasonal change - succession crises required rapid changes. By focusing on exceptions to temperate climates, <bold>Seasons and Sovereigns </bold> argues that many writers of the English Renaissance challenged the prescriptive accounts of innocuous socio-political climates or constant natural spaces by exploring the reasons behind floods, wonders, seasonal usurpation, and other perversions of nature's course found along the fringes of literary greenworlds.

The project begins by examining Queen Elizabeth's cult of ver perpetuum to justify a more capacious interpretation of the theory of the King's Two Bodies as it pertains to the body politic's exemption from the passage of time, including seasonal change. It contextualizes these issues by delineating how genre studies have responded to the presence of calendars and months in literary texts. Chapter 2 argues that a remarkable number of late sixteenth-century texts flood (or threaten to flood) a greenworld to reflect anxiety over succession. The epic-scale dissolution evoked by sea grottos, Parnassus, and the lost city of Atlantis level social distinctions as unequivocal signs of nature's lethal heterogeneity in Lyly's <italic>Gallathea,</italic> Boboli garden, and <italic>Cymbeline.</italic>

<p>Chapter 3 argues that Shakespeare replaces an Arcadian landscape with a theater of green wonders and Macduff's knowledge of seasonal decorum in <italic>Macbeth.</italic> The chapter begins in the "wake" of the Golden Age with Thomas Dekker's decision to revive pastoral in his account of the Queen's funeral in <italic>The Wonder-full Yeare,</italic> 1603. Chapter 4 shifts the Arcadian impulse inward by exploring resistance to constancy (a pastoral value) in <italic>The Changeling</italic>, where I juxtapose three normative views of human nature that were active in 1621. Rather than advocate one perspective on constancy, Chapter 5 suggests that Mary Wroth's heroines in the Urania dissolve contracts and engage in post-Golden Age political jurisprudence by promoting duplicity and metamorphosis.