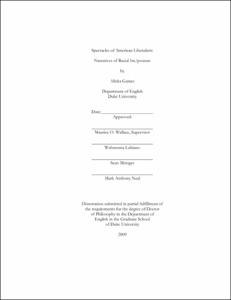 This project traces the seemingly improbable intersections between performances of blackness and the development and traces of an American liberalism defined by Gunnar Myrdal's overwhelmingly influential, sociological text, An American Dilemma. I argue that when Myrdal determined in his 1944 study on the "Negro problem" that the messy inconsistencies between how the United States articulated its laudable egalitarianism and the violent histories of oppression defining the lives of African Americans was a matter resting in the "hearts and minds of white America" rather than entrenched structural inequalities, he enabled a radicalized version of sentimentality that would structure how liberalism attempted to rectify this racial paradox right into the 21st century - to walk in someone else's skin rather than their shoes. While American liberalism is a notoriously contested and slippery set of ideologies, the texts I study provide a performative logic of American liberalism that deconstructs and historicizes its own ideological impulses around notions of racial difference.

The project situates the discursive legacies of Myrdal's study alongside a series of spectacularized narratives of what I call "racial im/posture" - adventures in racial impersonation authorized by American liberalism and reliant on the logics of both blackface minstrelsy and racial passing. I consider these narratives of racial im/posture in the literary genres of memoir, autobiography, fiction, and speculative fiction, along with the legal brief, the film, and the photograph. Although I read these seemingly disparate texts from my own epistemological disciplining of literary studies, the methodology employed here is an interdisciplinary one indebted to performance and visual studies, race and queer theory, as well as new Southern studies. The project intervenes in the conventional thinking around racial masquerade by reframing the temporality of what has largely been considered an issue of the 19th and early 20th centuries as well as by considering these texts through the anxieties, ironies, and contentions of the discursive legacies of American liberalism. In five chapters that satellite around the ideological apparatuses of our sociopolitical and cultural landscape including social and literary fictions, the law, and transnational capital, I think through issues of authenticity, belonging, community, appropriation, and performance.