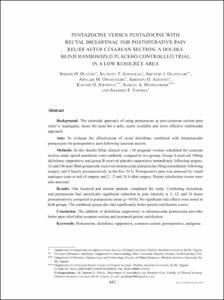 Professor of Anesthesiology
My interests include obstetric and gynecological anesthesia research. This includes the use of opioids in obstetric population.  I also have an interest in the management of the difficult airway in general anesthesia and in the Obstetric population. More recently, I have been engaged in global health and the role of anesthesia in resolving the disparity gap.  I have a particular interest in anesthesia in sub-sahara Africa and have been involved in capacity building, research and educat