The Effect of Wing Damage on Aeroelastic Behavior 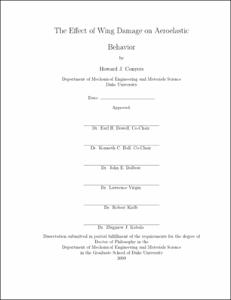 Theoretical and experimental studies are conducted in the field of aeroelasticity. Specifically, two rectangular and one cropped delta wings with a hole are analyzed in this dissertation for their aeroelastic behavior.

The plate-like wings are modeled using the finite element method for the structural theory. Each wing is assumed to behave as a linearly elastic and isotropic, thin plate. These assumptions are those of small-deflection theory of bending which states that the plane sections initially normal to the midsurface remain plane and normal to that surface after bending. The wings are modeled in low speed flows according to potential flow theory. The potential flow is governed by the aerodynamic potential equation, a linear partial differential equation. The aerodynamic potential equation is solved using a distribution of doublets that relates pressure to downwash in the doublet lattice method. A hole in a wing-like structure is independently investigated theoretically and experimentally for its structural and aerodynamic behavior.

The aeroelastic model couples the structural and aerodynamic models using Lagrange's equations. The flutter boundary is predicted using the V-g method. Linear theoretical models are capable of predicting the critical flutter velocity and frequency as verified by wind tunnel tests. Along with flutter prediction, a brief survey on gust response and the addition of stores(missile or fuel tanks) are examined.