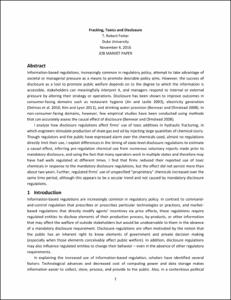 View / Download
363.5 Kb
Date
Author
Fetter, T
Repository Usage Stats
326
views
301
downloads
Abstract
Information-based regulations, increasingly common in regulatory policy, attempt to take advantage of societal or managerial pressure as a means to promote desirable policy aims. However, the success of disclosure as a tool to promote public welfare depends on to the degree to which the information is accessible, stakeholders can meaningfully interpret it, and managers respond to internal or external pressure by altering their strategy or operations. Disclosure has been shown to improve outcomes in consumer-facing domains such as restaurant hygiene (Jin and Leslie 2003), electricity generation (Delmas et al. 2010, Kim and Lyon 2011), and drinking water provision (Bennear and Olmstead 2008). In non-consumer-facing domains, however, few empirical studies have been conducted using methods that can accurately assess the causal effect of disclosure (Bennear and Olmstead 2008). I analyze how disclosure regulations affect firms’ use of toxic additives in hydraulic fracturing, in which engineers stimulate production of shale gas and oil by injecting large quantities of chemical slurry. Though regulators and the public have expressed alarm over the chemicals used, almost no regulations directly limit their use. I exploit differences in the timing of state-level disclosure regulations to estimate a causal effect, inferring pre-regulation chemical use from numerous voluntary reports made prior to mandatory disclosure, and using the fact that many operators work in multiple states and therefore may have had wells regulated at different times. I find that firms reduced their reported use of toxic chemicals in response to the mandatory disclosure regulations, but the effect did not persist more than about two years. Further, regulated firms’ use of unspecified “proprietary” chemicals increased over the same time period, although this appears to be a secular trend and not caused by mandatory disclosure regulations.
Type
Other article
Permalink
https://hdl.handle.net/10161/12993
Citation
Fetter, T (2016). Fracking, Toxics, and Disclosure. Retrieved from https://hdl.handle.net/10161/12993.
Collections
More Info
Show full item record

Affiliate
I am a Ph.D. candidate in the University Program in Environmental Policy at Duke University and a Doctoral Student Fellow at the Duke University Energy Initiative. I am an applied microeconomist with primary interests in energy and environmental economics. I am particularly interested in how firms learn about emerging technologies, how they respond to regulations, and the interplay between public policy and innovation and technological change.For more information please see my <a