Forms of Empire: Law, Violence, and the Poetics of Victorian Power 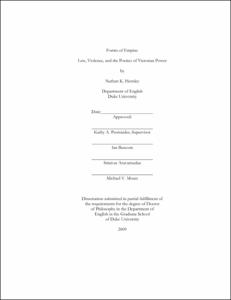 Victorian England was the first empire in history to imagine itself as liberal, believing that its own power could bring law to the darkest and most unruly corners of the world. But despite covering nearly the entire period known as the Pax Britannica, Victoria's long reign did not include a single year without war.

The conceptual knots presented by England's global power forced some of the century's most canonical authors to confront, and attempt to solve, contradictions fundamental to their self-consciously liberal society. Because law was understood by many Victorian theorists as the opposite of violence, it was when metropolitan thinkers came up against the fringes of civilization's ordering power, in the empire, that the violence underwriting peace become most uncomfortably plain. "Out there," said jurist James Fitzjames Stephen, "you see real government." But if what Stephen called the liberal state's quiet but crushing force emerged most explicitly at the peripheries of law's reach, literary forms composed at the center of the imperial network --London-- reveal the problem of liberal violence as absence, as silence: as a problem. These problems became dilemmas of narrative and poetic form that I argue are legible across linked areas of Victorian literary production: from the realist masterpiece (The Mill on the Floss) and the philosophical treatise (A System of Logic) to works of political historicism (On Liberty), sensation fiction (Armadale), and apparently apolitical poetry about flowers (Poems and Ballads). Forms of Empire looks to show how the Victorian state's interrelated forms --literary and political, conceptual and historical-- expose the violence liberal theory could not see.

Forms of Empire builds on and seeks to advance work on the pairing of "liberalism and empire" in the broad area of cultural studies. To do so it works dialectically, placing Victorian liberalism's vision of perpetual peace in the context of the empire's endless war and tracking loose networks of London-based thinkers as they confronted the problem of how violence relates to law. This process exposes live debates, both explicit and implicit, about just what force secured Victorian England's so-called Age of Equipoise. What emerges is a particularly literary analysis of how linked coteries of Victorian writers, through the height and decline of a great world power, attempted to make sense of the uneasy links they saw (and did not see) between liberalism and empire, the forms of law and the disorder of violence --the vexed connection, that is, between peace and war.

The project's focus on literary structure and political theory is also historical, tracing Victorian global rule from its phase of hegemonic globalization at mid-century (the so-called Age of Equipoise) into its more openly war-torn, post-1870 decline, a structure that corresponds to the project's two halves. While reframing existing periodizations of empire in Victorian Studies, this genealogical procedure also particularizes what is often studied as a homogenous "imperial discourse." Forms of Empire is necessarily interdisciplinary, since it charts the conceptual cross-pollination among semi-autonomous fields of Victorian knowledge: political theory, anthropology, economics, philosophy, and literature, among others. But it is also focused on method, showing that theoretical debates among Victorians themselves --about the dilemmas of their hegemony-- can illuminate controversies about liberalism, violence, and method in a newer moment of empire, ours.