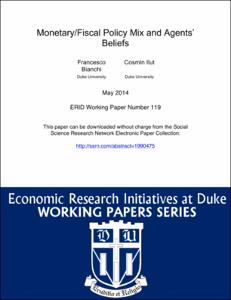 View / Download
692.7 Kb
Date
Authors
Bianchi, F
Ilut, C
Repository Usage Stats
134
views
686
downloads
Abstract
We reinterpret post World War II US economic history using an estimated microfounded model that allows for changes in the monetary/fiscal policy mix. We find that the fiscal authority was the leading authority in the ‘60s and the ‘70s. The appointment of Volcker marked a change in the conduct of monetary policy, but inflation dropped only when fiscal policy accommodated this change two years later. In fact, a disinflationary attempt of the monetary authority leads to more inflation if not supported by the fiscal authority. If the monetary authority had always been the leading authority or if agents had been confident about the switch, the Great Inflation would not have occurred and debt would have been higher. This is because the rise in trend inflation and the decline in debt of the ‘70s were caused by a series of fiscal shocks that are inflationary only when monetary policy accommodates fiscal policy. The reversal in the debt-to-GDP ratio dynamics, the sudden drop in inflation, and the fall in output of the early ‘80s are explained by the switch in the policy mix itself. If such a switch had not occurred, inflation would have been high for another fifteen years. Regime changes account for the stickiness of inflation expectations during the ‘60s and the ‘70s and for the break in the persistence and volatility of inflation.
Type
Journal article
Subject
Fiscal policy
monetary policy
infl ation
Markov-switching DSGE
Bayesian methods.
Permalink
https://hdl.handle.net/10161/13022
Collections
More Info
Show full item record