A Strategic Model of Magical Thinking: Axioms and Analysis 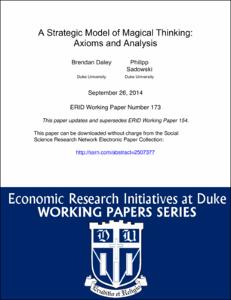 View / Download
764.7 Kb
Date
Authors
Sadowski, Philipp
Daley, Brendan
Repository Usage Stats
136
views
148
downloads
Abstract
This paper seeks to make two contributions. First, we propose and analyze a tractable model of strategic play in which players behave as if their expectations about their opponents' behavior vary with their own choices. We refer to this nonstandard updating as magical thinking. The model provides a unified view of documented behavior in a range of often-studied games, such as the Prisoners' Dilemma, the Battle of the Sexes, Hawk-Dove, and the Stag Hunt. Second, we provide axioms applied to the behavior of the collection of players in symmetric 2x2 games, and a representation theorem that establishes these axioms to be the precise behavioral content of the model. We thereby suggest a novel way to import the axiomatic methodology of individual decision theory to strategic settings and demonstrate the benefits of this approach. In the model, the degree to which players exhibit magical thinking is heterogeneous in the population and is captured by players' types. All players perceive types to be i.i.d. draws from a common distribution. We show that the model's parameters, namely these individual types and the commonly perceived distribution, can be (essentially) identified from behavior in games, allowing for tractable comparative statics. Finally, the model generates novel predictions across games. For example, the ability of a collection of players to coordinate on Pareto superior Nash equilibria in coordination games is positively correlated with their degree of cooperation in Prisoners' Dilemma games. The supplement for this paper are available at the following URL: <a href="http://ssrn.com/abstract=2507394">http://ssrn.com/abstract=2507394</a>
Type
Journal article
Subject
Prisoners' dilemma
coordination games
magical thinking
cooperation
Permalink
https://hdl.handle.net/10161/13081
Collections
More Info
Show full item record

Associate Professor of Business Administration
Brendan Daley is an Associate Professor of Economics at the Fuqua School of Business, where he teaches Managerial Economics in the Daytime and Executive MBA programs. His research interests are in microeconomic theory, especially economic dynamics and the role of information in markets. His current research program investigates the effect of information on market prices, trade volume and efficiency. Professor Daley received his PhD from Stanford University's Graduate School of Business.
This author no longer has a Scholars@Duke profile, so the information shown here reflects their Duke status at the time this item was deposited.