Pumilio-mediated Repression of mRNAs in the Early Drosophila Melanogaster Embryo 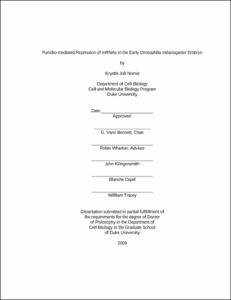 Post-transcriptional regulation plays an important role in governing various processes in all organisms. The development of the early embryo of <italic>Drosophila melanogaster</italic> is governed solely by post-transcriptional mechanisms; therefore, further insights into post-transcriptional regulation can be gained by studying the <italic>Drosophila </italic> embryo. This thesis addresses the actions of the translational repressor, Pumilio, in regulating two mRNAs during early embryogenesis. First, we examined the ability of Pumilio to regulate the mRNA stability of <italic>bicoid</italic>, a gene required for <italic>Drosophila </italic> head development. <italic>bicoid</italic> mRNA contains the canonical Pumilio recognition site, termed the Nanos response element (NRE), within the 3'UTR. Interestingly, we show that Pumilio binds to the NRE both in vitro and in vivo; however, no physiological significance is associated with this interaction. Furthermore, in <italic> pumilio</italic> mutant embryos <italic>bicoid</italic> mRNA stability and translation are unaltered, demonstrating that Pumilio does not regulate <italic>bicoid</italic> mRNA. Second, Pumilio has been shown to negatively regulate <italic>Cyclin B</italic>, the cyclin necessary for mitotic entry, in the somatic cytoplasm of the embryo and this repression is alleviated by the PNG Kinase complex through currently unidentified mechanisms. We further investigated the actions of Pumilio in regulating <italic>Cyclin B</italic> and discovered that the canonical partner of Pumilio, Nanos, is not involved in repressing somatic <italic>Cyclin B</italic>. Furthermore, we show that the 3'UTR of <italic>Cyclin B</italic> is not required for the regulation by Pumilio and the PNG Kinase complex. Lastly, through genetic analyses, we conclude that Pumilio may actually act upstream of the PNG Kinase complex to regulate <italic>Cyclin B</italic>.