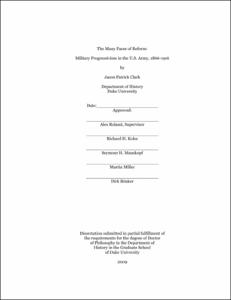 In the years 1866-1916, the U.S. Army changed from a frontier constabulary to an industrial age force capable of expeditionary operations. This conversion was made possible by organizational reforms including the creation of a system of professional education, a coordinating central staff, and doctrine integrating tactics, equipment, and organization. Yet formal structures acted in parallel with the informal culture of the officer corps, which proved far more resistant to change. This dissertation will follow the formulation of these reforms by Emory Upton following the Civil War, through their implementation by Elihu Root in the early twentieth century. It concludes in 1916, when new conditions produced an entirely different agenda for reform.

This period has generally been interpreted in one of two ways. Previous scholarship examining the internal workings of the Army has seen it as a transition from obsolete to modern organization. Despite disagreements as to the origins, impetus, and length of reform, the theme of progress has been consistent. In contrast, the historiography of the Army's external relationship with society has interpreted reform as a failed attempt to introduce militarism by mimicking foreign military institutions alien to American traditions. Although some of the foreign organizational forms were adopted, society ultimately rejected the militarist aims. This dissertation modifies both interpretations by arguing that these reforms were not as great a break with previous practices as generally asserted. The internal changes were actually a reordering of existing practices made possible by the sudden elevation of the reforming faction to organizational power. Individuals sought to emphasize only those limited aspects of the old professional culture that they valued. These individual aims often diverged, leading to a series of disjointed reforms that, while successful in altering the army, did so in unanticipated ways. These internal efforts were meant to improve the army's effectiveness; there was little effort to alter the Army's role in society. Yet the next generation of reformers sought such a change under the dubious guise of a return to tradition. In doing so, they falsely portrayed their predecessors as foreign-inspired militarists, a mischaracterization that has been largely accepted by historians.