An integrated transcriptome and expressed variant analysis of sepsis survival and death. 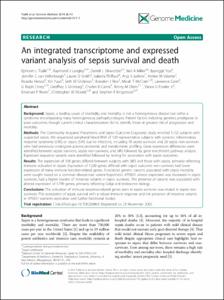 Gary Hock Distinguished Professor in Global Health, in the School of Medicine
My research is based at the Duke Clinical Research Institute, a large academic clinical research organization designed to conduct clinical trials from small local studies to worldwide trials. The focus of my research is bacterial infections: complicated skin and skin structure infections; postoperative wound infections; hospital-acquired and ventilator-associated pneumonia; bacteremia; and endocarditis. Many of these trials are conducted in concert with the pharmaceutical industry in ord Adjunct Professor in the Department of Medicine
Dr. Geoffrey S. Ginsburg's research interests are in the development of novel paradigms for developing and translating genomic information into medical practice and the integration of personalized medicine into health care. Adjunct Associate Professor in the Department of Medicine
My research is focused on understanding the dynamic between host and pathogen so as to discover and develop host-response markers that can diagnose and predict health and disease.  This new and evolving approach to diagnosing illness has the potential to significantly impact individual as well as public health considering the rise of antibiotic resistance. With any potential infectious disease diagnosis, it is difficult, if not impossible, to determine at the time of presentation