On the convex Pfaff-Darboux Theorem of Ekeland and Nirenberg 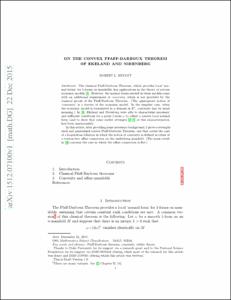 View / Download
159.6 Kb
Date
Author
Bryant, RL
Repository Usage Stats
169
views
78
downloads
Abstract
The classical Pfaff-Darboux Theorem, which provides local `normal forms' for 1-forms on manifolds, has applications in the theory of certain economic models. However, the normal forms needed in these models come with an additional requirement of convexity, which is not provided by the classical proofs of the Pfaff-Darboux Theorem. (The appropriate notion of `convexity' is a feature of the economic model. In the simplest case, when the economic model is formulated in a domain in n-space, convexity has its usual meaning. In 2002, Ekeland and Nirenberg were able to characterize necessary and sufficient conditions for a given 1-form to admit a convex local normal form (and to show that some earlier attempts at this characterization had been unsuccessful). In this article, after providing some necessary background, I prove a strengthened and generalized convex Pfaff-Darboux Theorem, one that covers the case of a Legendrian foliation in which the notion of convexity is defined in terms of a torsion-free affine connection on the underlying manifold. (The main result in Ekeland and Nirenberg's paper concerns the case in which the affine connection is flat.)
Type
Journal article
Subject
math.DG
math.DG
58A15, 91B16
Permalink
https://hdl.handle.net/10161/13137
Collections
More Info
Show full item record