Complex analysis and a class of Weingarten surfaces 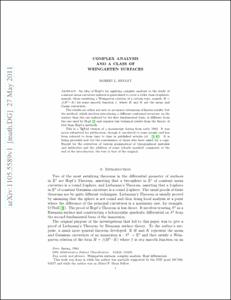 View / Download
152.6 Kb
Date
Author
Bryant, R
Repository Usage Stats
123
views
52
downloads
Abstract
An idea of Hopf's for applying complex analysis to the study of constant mean curvature spheres is generalized to cover a wider class of spheres, namely, those satisfying a Weingarten relation of a certain type, namely H = f(H^2-K) for some smooth function f, where H and K are the mean and Gauss curvatures, respectively. The results are either not new or are minor extensions of known results, but the method, which involves introducing a different conformal structure on the surface than the one induced by the first fundamental form, is different from the one used by Hopf and requires less technical results from the theory of PDE than Hopf's methods. This is a TeXed version of a manuscript dating from early 1984. It was never submitted for publication, though it circulated to some people and has been referred to from time to time in published articles. It is being provided now for the convenience of those who have asked for a copy. Except for the correction of various grammatical or typographical mistakes and infelicities and the addition of some (clearly marked) comments at the end of the introduction, the text is that of the original.
Type
Other article
Permalink
https://hdl.handle.net/10161/13146
Citation
Bryant, R (2011). Complex analysis and a class of Weingarten surfaces. Retrieved from https://hdl.handle.net/10161/13146.
Collections
More Info
Show full item record