On extremals with prescribed Lagrangian densities 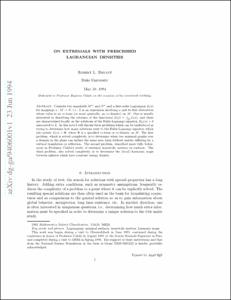 View / Download
244.0 Kb
Date
Author
Bryant, R
Editors
Bartolomeis, P
Tricerri, F
Vesentini, E
Repository Usage Stats
112
views
45
downloads
Abstract
This article studies some examples of the family of problems where a Lagrangian is given for maps from one manifold to another and one is interested in the extremal mappings for which the Lagrangian density takes a prescribed form. The first problem is the study of when two minimal graphs can induce the same area function on the domain without differing by trivial symmetries. The second problem is similar but concerns a different `area Lagrangian' first investigated by Calabi. The third problem classified the harmonic maps between spheres (more generally, manifolds of constant sectional curvature) for which the energy density is a constant multiple of the volume form. In the first and third cases, the complete solution is described. In the second case, some information about the solutions is derived, but the problem is not completely solved.
Type
Book section
Permalink
https://hdl.handle.net/10161/13151
Collections
More Info
Show full item record