A Party in the Conference Room: Partisan Politics and the Modern Conference Committee 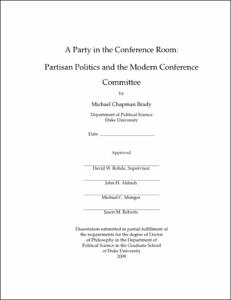 Despite the crucial role that conference committees can play in the legislative process, relatively little is understood about the forces that influence conference outcomes and the priorities of conferees. In particular, the literature on conferences rarely considers the importance of parties, while prominent theories of party government in Congress do not engage the role of conferences in the legislative process. Given the unique features of the conference reports (i.e., they are subject only up-or-down votes, they are generally protected from further amendments, they enjoy a high probability of passage, and they provide a means to make controversial changes/additions to legislation with minimal scrutiny) conferences can be a useful means for majority conferees to further the legislative goals of their party. To the extent that one of the goals of a legislative majority is to pass legislation that better reflects the interests of its members, then partisan politics should play an active role at the conference stage and in the decisions of conferees. This dissertation serves to connect the conference and party government literatures by considering the claim that majority parties in Congress can and do use the conference process to pursue a partisan legislative agenda.

This broad claim is considered in three separate chapters that test hypotheses about the role of party politics in different aspects of the conference process. Chapter two tests the hypothesis that more partisan conference delegations are associated with changes in policy that are more consistent with the majority party's preferences. Since the Speaker of the House has sole discretion over the composition of the House's delegation it is possible that strategic selection of conferees could advantage the preferences of the majority in the House. Using original data that includes information on every conference committee from 1981-2008 the empirical analysis shows that changes in House minority support in roll call vote before and after conference are smaller for conferences where the percentage of the House majority delegation is larger. Increases in minority shifts of support within both chambers is also predicted by increased support for the report by minority conferees and more bipartisan support in the opposing chamber. Though the analysis cannot directly test whether strategic selection by the House Speaker is effective, the results do show that if a conference delegation is dominated by the majority party that conference reports are more partisan. Thus the results indicate that the decision to appoint conferees can be used to influence the partisan content of conference outcomes.

Chapter three looks at whether compromises made in conference reflect a bias towards the interests of majority members. Using newly available data from the first session of the 110th Congress, which allow for a comparison of earmarks before and after conference, the chapter provides one of the first analyses of how earmarks are changed during bicameral negotiations. Specifically, this chapter tests hypotheses on whether the earmarks of majority, well-connected, and electorally vulnerable members are advantaged in how conferees decided to change the value of pork barrel projects in conference. Lastly, since earmarking is generally considered to be free of partisan conflict, the data provides a demanding test of the existence of a majority bias. The results show evidence of majority bias for Representatives and Senators in conference earmarking during the 110th Congress.

Chapter four focuses on decision making in conference at the level of individual conferees. Using original data collected on every conferee's decision to sign a report from 1981-2008 the analysis this chapter tests the extent to which party loyalty is a factor in conferee decision making. Through descriptive, multivariate, and multilevel analyses of signature decisions the results show that majority affiliation, relative to committee and individual preferences is increasingly the dominant factor in predicting whether a conferee signs a conference report. This results also establish that contextual features of a conference, such as whether the bill was referred to multiple committees before conference, whether the bill considered was an appropriations measure, and whether the House was in a position to act first on the conference report, are all significant predictors of disagreement. Lastly, the results provide evidence that partisan conflict in support of conference reports generally increased over this period and that unified governments accentuate this conflict. These results support the overarching claim of the project in that conflict over the content of conference reports is increasingly divided along party lines to the advantage of the majority party.

Together the different analyses of the three chapters provide evidence of the claim that majority parties can and do pursue partisan goals in the contemporary conference process. Furthermore the results advance scholarly understanding of the many forces at play in conference committee bargaining and how they contribute to legislative outcomes through the complexities of the conference process.