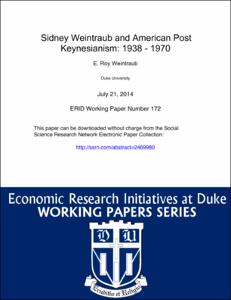 View / Download
286.8 Kb
Date
Author
Weintraub, ER
Repository Usage Stats
144
views
146
downloads
Abstract
Sidney Weintraub (1914-1983) was an American economist who spent most of his career at the University of Pennsylvania. A distinguished economic theorist (and the author’s father), he was a co-founder of the Journal of Post Keynesian Economics, and the leading figure in the US in the early years of the Post Keynesian movement. This article shows how the early development of American Post Keynesianism, despite claims to the contrary by historians of Post Keynesianism, had no connection to the UK group centered around Joan Robinson in Cambridge.
Type
Journal article
Subject
Sidney Weintraub
Post Keynesian economics
Paul Davidson
wage-price inflation
Permalink
https://hdl.handle.net/10161/13160
Collections
More Info
Show full item record Professor Emeritus of Economics
Roy Weintraub was trained as a mathematician though his professional career has been as an economist. Beginning in the early 1980s, his research and teaching activities focused upon the history of the interconnection between mathematics and economics in the twentieth century. This work, in the history of economics, has helped shape the understanding of economists and historians: his General Equilibrium Theory (1985), Stabilizing Dynamics (1991),