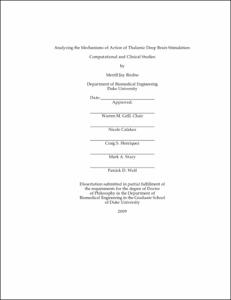 Deep brain stimulation (DBS) is an established treatment for movement disorders that has been implanted in more than 40,000 patients worldwide. Despite the successes of DBS, its mechanisms of action are not well understood. Early descriptions of the mechanisms of DBS focused on whether DBS excited or inhibited neurons in the stimulated nucleus. However, changes in the <italic>patterns</italic> of neuronal activity, and not just changes in the rate of neuronal activity, play a major role in the pathology of movement disorders. Therefore, we hypothesized that the temporal pattern of stimulation might be an important factor in determining the effectiveness of DBS. The purpose of this dissertation was to use temporally <italic>irregular</italic> patterns of stimulation (non-regular interpulse intervals) to probe the mechanisms of thalamic DBS in suppressing tremor. The clinical tremor measurements reported in this dissertation represent the first tremor data published during stimulation with temporally <italic>irregular</italic> stimulus trains in human subjects. First, we tested the effects of paired-pulse DBS on tremor suppression in human subjects with essential tremor and on the responses of a computational model of thalamic neurons. DBS was more effective at reducing tremor when pulses were evenly spaced than when there were large differences between intrapair and interpair pulse intervals, suggesting that tremor suppression is dependent on the <italic>pattern</italic> of DBS and not just the average rate of stimulation. Increasing the difference between the intrapair and interpair intervals in the computational model rendered model neurons more likely to fire synchronous bursts. Second, we quantified the effects of the degree of regularity of temporally random stimulus trains in human subjects with tremor. We pioneered an innovative preparation to conduct these experiments--during surgery to replace the implantable pulse generator--which allowed us to establish a direct connection to implanted DBS leads under stable conditions. Stimulus trains were less effective at relieving tremor as the temporal spacing between stimulus pulses in DBS trains became more irregular. However, the reasons for the decreased efficacy of the temporally irregular stimulus trains was not clear. Third, we evaluated the contributions of `<italic>pauses</italic>,' `<italic>bursts</italic>,' and `<italic>irregularity, per se</italic>' to the inability of irregular stimulus trains to suppress tremor. Stimulus trains with <italic>pauses</italic> were significantly less effective at suppressing tremor than stimulus trains without <italic>pauses</italic>, while there were no significant changes in tremor suppression between trains with <italic>bursts</italic> and those without <italic>bursts</italic>, or between trains that were <italic>irregular</italic> and those that were <italic>periodic</italic>. We also developed a computer-based biophysical model of a thalamic network to simulate the response of thalamic neurons to the same temporal patterns of DBS. Trains that effectively suppressed tremor in human subjects also suppressed fluctuations in transmembrane potential at the frequency associated with burst-driven cerebellar inputs to the thalamus. Both clinical and computational findings indicate that DBS suppresses tremor by masking cerebellar burst-driven input to the thalamus.

The work in this dissertation bridges an important gap between the hypothesis that high-frequency DBS masks pathological activity in the cerebello-thalamo-cortical circuit and the experimentally observed finding that DBS in the subthalamic area suppresses tremor more effectively than DBS in the Vim thalamus proper. We provided experimental and computational evidence that the mechanism of DBS is to mask the burst-driven cerebellar inputs to the thalamus. Hence, the most relevant neuronal targets for effective tremor suppression are the afferent cerebellar fibers that terminate in the thalamus.