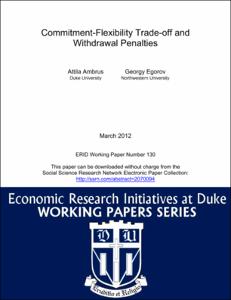 View / Download
688.5 Kb
Date
Authors
Ambrus, A
Egorov, G
Repository Usage Stats
136
views
84
downloads
Abstract
Withdrawal penalties are common features of time deposit contracts offered by commercial banks, as well as individual retirement accounts and employer-sponsored plans. Moreover, there is a significant amount of early withdrawals from these accounts, despite the associated penalties, and empirical evidence shows that liquidity shocks of depositors are a major driving force of this. Using the consumption-savings model proposed by Amador, Werning and Angeletos in their 2006 Econometrica paper (henceforth AWA), in which individuals face the trade-off between flexibility and commitment, we show that withdrawal penalties can be part of the optimal contract, despite involving money-burning from an ex ante perspective. For the case of two states (which we interpret as “normal times” and a “negative liquidity shock”), we provide a full characterization of the optimal contract, and show that within the parameter region where the first best is unattainable, the likelihood that withdrawal penalties are part of the optimal contract is decreasing in the probability of a negative liquidity shock, increasing in the severity of the shock, and it is nonmonotonic in the magnitude of present bias. We also show that contracts with the same qualitative feature (withdrawal penalties for high types) arise in continuous state spaces, too. Our conclusions differ from AWA because the analysis in the latter implicitly assumes that the optimal contract is interior (the amount withdrawn from the savings account is strictly positive in each period in every state). We show that for any utility function consistent with their framework there is an open set of parameter values for which the optimal contract is a corner solution, inducing money burning in some states.
Type
Journal article
Subject
Commitment
flexibility
self-control
money-burning
Permalink
https://hdl.handle.net/10161/13197
Collections
More Info
Show full item record Professor of Economics
Professor Ambrus’ research focuses on a broad range of subjects including game theory, experimental economics, microeconomic theory, industrial organization, political economics, development economics and economic history. He has received various grants from the National Science Foundation. His most recent work has been published in the American Economic Review, the Quarterly Journal of Economics, Econometrica, and Theoretical Economics.