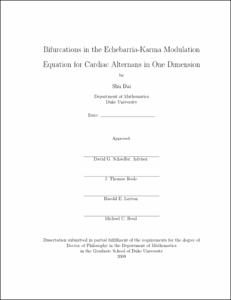 While alternans in a single cardiac cell appears through a simple

of the bifurcation is unclear. In particular, the phase of

stationary or traveling, which is known as <italic>discordant</italic>

alternans. We study these phenomena in simple cardiac models

through a modulation equation proposed by Echebarria-Karma. In

this dissertation, we perform bifurcation analysis for their

Suppose we have a cardiac fiber of length l, which is

stimulated periodically at its x=0 end. When the pacing period

(basic cycle length) B is below some critical value Bc,

alternans emerges along the cable. Let a(x,n) be the amplitude

of the alternans along the fiber corresponding to the n-th

equation for the evolution of a(x,t) under some approximation,

which after nondimensionization is as follows:

where the linear operator

In the equation, σ is dimensionless and proportional to

onset of linear instability. No flux boundary conditions are

imposed on both ends.

The zero solution of their equation may lose stability, as the

pacing rate is increased. To study the bifurcation, we calculate

the spectrum of operator <bold>L</bold>. We find that the

first depends on parameters in the equation, and for one critical

case both modes bifurcate together at a degenerate (codimension 2)

For parameters close to the degenerate case, we investigate the

competition between modes, both numerically and analytically. We

find that at sufficiently rapid pacing (but assuming a 1:1

response is maintained), steady patterns always emerge as the only

stable solution. However, in the parameter range where Hopf

(just after the bifurcation) to the eventual standing wave

solution occurs through an interesting series of secondary

We also find that for some extreme range of parameters, the

in recent years has been regarded to be closely related with

chaotic phenomena in two- or three-dimensional space, for instance

spiral and scroll waves. We show the existence of chaotic waves in

one dimension by the Echebarria-Karma modulation equation for

cardiac alternans. This new discovery may provide a different

mechanism accounting for the instabilities in cardiac dynamics.