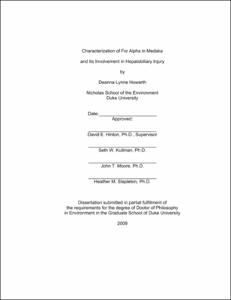 The liver is a primary target for toxicants and/or their metabolites. Selected fish species now serve as model organisms for laboratory investigations of toxic responses in the liver. One such model is the Japanese medaka (<italic>Oryzias latipes</italic>), a small freshwater teleost with a robust history of usage in liver and biliary toxicity studies. The structural components of the medaka hepatobiliary system have been well-described by recent studies in two- and three-dimensional contexts, but efforts to characterize the molecular mechanisms underlying critical medaka liver functions during normalcy remain sparse. This dearth of information makes it difficult to definitively characterize toxic responses in this model organism. A crucial transcription factor underlying proper hepatobiliary function in both mammalian and non-mammalian species is the farnesoid X receptor alpha (FXR&alpha;), a member of the nuclear receptor superfamily that plays a key role in bile acid homeostasis. This dissertation describes the function of medaka fxr&alpha; during both normalcy and toxicity.

To achieve this overall objective, <italic>in vitro</italic> techniques were first employed to study the function of medaka <italic>fxr&alpha;</italic>. Two isoforms of <italic>fxr&alpha;</italic> that differ in the AF1 domain, Fxr&alpha;1 and Fxr&alpha;2, were isolated from liver cDNA and are the result of alternative splicing of one gene locus. Fxr&alpha;2 responded significantly to C24 bile acids and the synthetic FXR&alpha; agonist GW4064. On the other hand, Fxr&alpha;1, despite having an identical ligand-binding domain to that of Fxr&alpha;2, showed no response to any agonists tested by transient transactivation assays. Furthermore, Fxr&alpha;2 interacted with nuclear receptor coactivators PGC-1&alpha; and SRC-1 in mammalian two-hybrid assays while Fxr&alpha;1 did not. These findings point to a significant importance of the AF1 domain to overall receptor structure and function.

Because of studies in the mammalian literature that demonstrated alleviation of cholestatic injury induced via the classic hepatotoxicant &alpha;-naphthylisothiocyanate (ANIT) by GW4064, it was originally hypothesized that a similar finding would be observed in medaka coexposed to these compounds. However, because of GW4064's ability to induce sublethal hepatic alterations in medaka, it was anticipated that its coadministration with ANIT would result in enhanced toxicity rather than alleviation as described in rodent models. However, despite the sublethal alterations induced by 1 uM GW4064, alleviation of toxicity following exposure to 15 uM ANIT was observed. Surprisingly, reduction of GW4064's toxicity was also observed in larvae exposed to both compounds. These investigations of <italic>fxr&alpha;</italic> function are an important and essential component in furthering our understanding of hepatobiliary toxicity in small aquarium fish models of human liver disease. These collective findings have created molecular underpinnings necessary for understanding medaka hepatobiliary function during normalcy and toxicity.