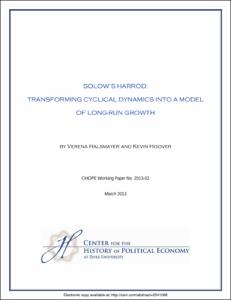 View / Download
243.6 Kb
Date
Authors
Halsmayer, V
Hoover, KD
Repository Usage Stats
151
views
167
downloads
Abstract
Modern growth theory derives mostly from Robert Solow’s “A Contribution to the Theory of Economic Growth” (1956). Solow’s own interpretation locates the origins of his “Contribution” in his view that the growth model of Roy Harrod implied a tendency toward progressive collapse of the economy. He formulates his view in terms of Harrod’s invoking a fixed-coefficients production function. We challenge Solow’s reading of Harrod’s “Essay in Dynamic Theory,” arguing that Harrod’s object in providing a “dynamic” theory had little to do with the problem of long-run growth as Solow understood it, but instead addressed medium-run fluctuations, the “inherent instability” of economies. It was an attempt to isolate conditions under which the economy might tend to run below potential. In making this argument, Harrod does not appeal to a fixed-coefficients production function – or to any production function at all, as that term is understood by Solow. Solow interpreted Harrod’s “Essay” in the light of a particular culture of understanding grounded in the practice of formal modeling that emerged in economics in the post-World War II period. The fate of Harrod’s analysis is a case study in the difficulties in communicating across distinct interpretive communities and of the potential for losing content and insights in the process. From Harrod’s English Keynesian point of view, Solow’s interpretation arose out of a culture of misunderstanding, and his objects – particularly, of trying to account for a tendency.
Type
Journal article
Subject
economic growth
Roy Harrod
Robert Solow
dynamics
dynamic instability
knife-edge
warranted rate of growth
natural rate of growth
Permalink
https://hdl.handle.net/10161/13227
Collections
More Info
Show full item record