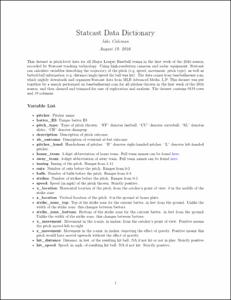 Files
Statcast Data Set
1.0 Mb
Data Dictionary
118.3 Kb
Final Report
148.7 Kb
Date
Authors
Coleman, Jake
Rundel, Colin
Repository Usage Stats
479
views
1,146
downloads
Abstract
In this Data Exploration, students were introduced to baseball dataset Statcast, downloaded from baseballsavant.mlb.com, that included every pitch thrown in the first week of the 2016 season, with 21 characteristics. The students were tasked with using R packages dplyr and ggplot2 to answer data exploration and summarizion questions. The exercises challenged them to use information about the data as well as newly acquired computation skills. The Statcast data is owned by MLB Advanced Media, L.P. and was downloaded from a search performed on baseballsavant.mlb.com for all pitches from 4/1/16 to 4/7/16. Statcast is a relatively new dataset (introduced in 2015), including all pitch characteristics from its precurser PitchF/X (such as pitch movement, type, start and end velocity, etc.). Statcast alsoadded tracking of the ball during the entirety of the play, as well as tracking for all elders. Full Statcast data is not yet available to the public, but Baseball Savant allows the public to have access to Statcast-added batted ball variables such as launch angle and batted ball speed. Dplyr is an extremely powerful tool for exploring data, using simple structure to perform complex data management tasks. Students were introducted to dplyr in a previous lecture, and used the Statcast data to gain hands-on experience working with data. Their tasks ranged from simple summaries to sophisticated manipulation (as real data is rarely in perfect form for desired analysis). They also integrated the R package ggplot2 to visualize some of their findings and draw further conclusions.
Type
Dataset
Learning Object
Report
Subject
R
dplyr
ggplot2
statcast
data science
Permalink
https://hdl.handle.net/10161/13261
Citation
Coleman, Jake; & Rundel, Colin (2016). STA 112, Data Science, Statcast. Retrieved from https://hdl.handle.net/10161/13261.
Collections
More Info
Show full item record Assistant Professor of the Practice of Statistical Science
Alphabetical list of authors with Scholars@Duke profiles.