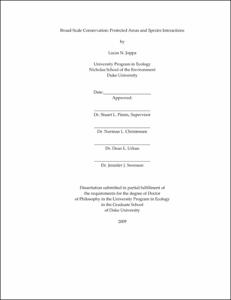 This dissertation consists of four chapters. The first three chapters examine protected areas (or parks) from multiple perspectives. Parks are the first, and often only, line of defense in efforts to conserve biodiversity. Understanding of their promise and problems is necessary to achieve conservation outcomes. Chapter One determines vegetation patterns in and around parks of differing management categories across the Amazon, Congo, South American Atlantic Coast, and West African forests. Within these forests, protected areas are the principle defense against forest loss and species extinctions. In the Amazon and Congo, parks are generally large and retain high levels of forest cover, as do their surroundings. In contrast, parks in the Atlantic Coast forest and West Africa show sharp boundaries in forest cover at their edges. This effective protection of forest cover is partially offset by their very small size: little area is deep inside park boundaries. Compared to West Africa, areas outside parks in the Atlantic Coast forest are unusually fragmented.

Chapter Three provides a review of common approaches to evaluating protection's impact on deforestation, identifies three hurdles to empirical evaluation, and notes that matching techniques from economic impact evaluation address those hurdles. The central hurdle derives from the fact that protected areas are distributed non-randomly across landscapes. Matching controls for landscape characteristics when inferring the impact of protection. Applications of matching have revealed considerably lower impact estimates of forest protection than produced by other methods. These results indicate the importance of variation across locations in how much impact protection could possibly have on rates of deforestation.

Chapter Four departs from the focus of protected areas and instead addresses a more theoretical aspect of community ecology. Ecological theories suggest that food webs might consist of groups of species forming blocks, compartments or guilds. Chapter Four considers ecological networks (subsets of complete food webs) involving species at adjacent trophic levels. Reciprocal specializations occur when (say) a pollinator (or group of pollinators) specializes on a particular flower species (or group of such species) and vice versa. We characterize the level of reciprocal specialization for various classes of networks. Our analyses include both antagonistic interactions (particularly parasitoids and their hosts), and mutualistic ones (such as insects and the flowers that they pollinate). We also examine whether trophic patterns might be palimpsests. That is, there might be reciprocal specialization within taxonomically related species within a network, but these might be obscured when these relationships are combined. Reciprocal specializations are rare in all these systems even when tested using the most conservative null model.