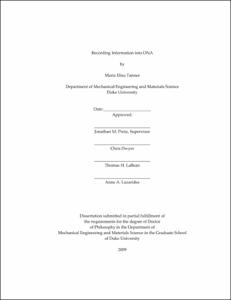 The objective of this research is to develop the concept of "genetic memory", the storage of information into genetic material, through the demonstration of the feasibility and benefits of recording the time-history of one or more environmental state variables into genetic material. First, the amount of information that could be stored into non-coding DNA using a lossy mechanism such as regulated diffusion is determined by developing a mathematical model. Next, a mechanism through which this concept of sensing, recording, and storing information on the nanoscale could be accomplished is proposed.

In conjunction with DNA, which is the actual means of storing information, the proposed approach for the realization of genetic memory also uses thermosensitive liposomes as a means of sensing state variables and acting as a valve to transport and release the DNA in response to the appropriate stimuli. Each variant of thermally sensitive liposomes contains a unique DNA sequence that serves as an identifier. Upon release, the DNA encounters ligase, ATP, and other cofactors and binds - preserving a record of the stimulus experienced by the liposomes. Liposomes, through careful design, can be developed to have unique transition temperatures at which the permeability rate of the contents encapsulated by the liposome increases. It is only at or above this transition temperature that a liposome will become porous.

Through modeling and experimentation, the feasibility of the liposome/DNA system as a mechanism for information storage is successfully demonstrated.