A genome-wide association study of variants associated with acquisition of Staphylococcus aureus bacteremia in a healthcare setting. 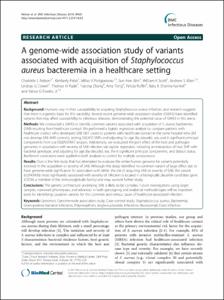 Professor of Biostatistics & Bioinformatics
My research focuses on developing new statistical methods for identifying susceptibility loci involved in complex human disease.  It involves a mix of genetics, statistics, and computer science and is motivated by the complexities of real data encountered in collaborative disease-gene mapping projects.