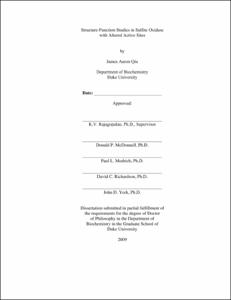 Sulfite oxidase, a metabolically important enzyme, catalyzes the physiologically critical conversion of sulfite to sulfate in the terminal step of the degradation of sulfur containing compounds. The enzyme has been the focus for much research since its discovery in the 1950's. A central question to understanding the mechanism of molybdoenzymes such as sulfite oxidase and nitrate reductase concerns the roles of active site residues and the coordination chemistry of the Mo atom in the structure and function of the enzyme. The goal of this work was directed towards the characterization and determination of the structures of active site variants of sulfite oxidase using a spectroscopic, kinetic, and protein crystallographic approach.

Earlier studies have identified a single, highly conserved cysteine residue as the donor of a covalent bond from the protein to molybdenum in sulfite oxidase and nitrate reductase. The C185S and C185A variants of chicken sulfite oxidase exhibited severely attenuated activity. Crystallographic and spectroscopic analysis of both variants revealed a change in the metal coordination, from a dioxo to a trioxo form of Mo.