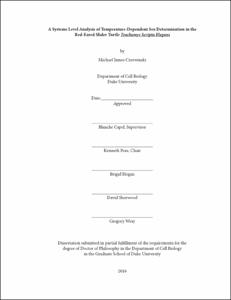 Sex determination is a critical biological process for all sexually reproducing animals. Despite its significance, evolution has provided a vast array of mechanisms by which sexual phenotype is determined and elaborated even within amniote vertebrates. The most prevalent systems of sex determination in this clade are genetic and temperature dependent sex determination. These two systems are sometimes consistent within large groups of species, such as the mammals who nearly ubiquitously utilize XY genetic sex determination, or they can be much more mixed as in reptiles that use genetic or temperature dependent systems and even both simultaneously. The turtles are a particularly diverse group in the way they determine sex with multiple different genetic and temperature based systems having been described. We investigated the nature of the temperature based sex determination system in Trachemys scripta elegans to ascertain whether it behaved as a purely temperature based system or if some other global source of sex determining information might be apparent within thermal regions insufficient to fully induce male or female development. These experiments found that sex determination in this species is much more complex and early acting than previously thought and that each gonad within an individual has the same sexual fate established enough that it can persist even without further communication between. We established a best practice for the assembly and annotation of de novo whole transcriptomes from T. scripta RNA-seq and utilized the technique to quantify the gene regulatory events that occur across the thermal sensitive period.

Evidence is entirely lacking on the resolution of TSD when eggs are incubated at the pivitol temperature in which equal numbers or males and females are produces. We have produced a timecourse data set that allowed for the elucidation of the gene expression events that occur at both the MPT and FPT over the course of the thermal sensitive period. Our data suggests that early establishment of a male or female fate is possible when temperature is sufficiently strong enough as at MPT and FPT. We see a strong pattern of mutually antagonistic gene expression patterns emerging early and expanding over time through the end of the period of gonad plasticity. In addition, we have identified a strong pattern of differential expression in the early embryo at stages prior to the formation of the gonad. Even without the known systemic signaling attributed to sex hormones emanating from the gonad, the early embryo has a clear male and female gene expression pattern. We discuss how this early potential masculinization or feminization of the embryo may indicate that the influence of temperature may extend beyond the determination of gonadal sex or even metabolic adjustments and how this challenges the well-defined paradigm in which gonadal sex determines peripheral sexual characteristics.